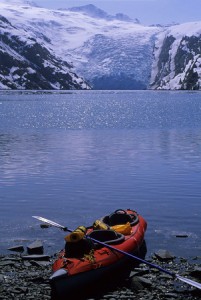 Back in 2009, photographer Ryan Bonneau (Telluride Magazine summer cover, 2010) spent two months trying not to get eaten by bears. Bonneau was on a two-month-long solo kayaking expedition in the Prince William Sound, on the 20th anniversary of the Exxon Valdez oil spill, shooting photos and raising money to combat the long-lasting effects of the disaster. Bonneau kayaked 800 miles in the self-supported excursion, living off what he could carry in two bear-proof canisters and an occasional salmon. “Food was an issue because of the bears, but it was by far the coolest thing I’ve ever done,” says Bonneau. “It was interesting to see the effects of the spill twenty years after, and the environmental and cultural issues it created.”

This spring Bonneau will be dodging alligators instead of bears, as he kayaks the gulf coast, from Texas to Florida, a year after the BP oil spill erupted into those waters. Bonneau is raising money for his trip with a photo exhibit at the Steaming Bean, but the trip itself will be in support of  conservation groups such as Waterkeeper Alliance. The logistics of bayou camping and alligator evading are going to be a bit tricky for Bonneau, but he’s up for the challenge. “It’s definitely a different area, and I’ve never been in that environment before,” says Bonneau. “But my main goal is to raise money for these groups to help with the cleanup.”

Bonneau’s landscape photography will be on display at the Steaming Bean throughout January, or you can browse and order one of his prints online.