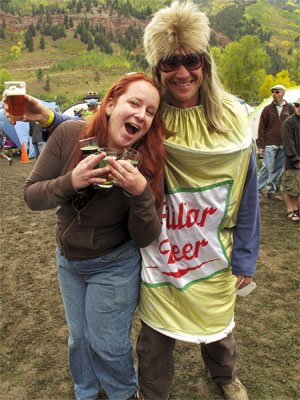 In the bloated gas-bag that is summer music festivals, few rise to the top: Glastonbury, Woodstock, Lollapalooza, PinkPop. I’ve not attended them all, but I do have a favourite. It may be less-known on the international circuit, but that is most certainly a good thing. And it has something that the others do not offer on such a grand scale: many hefty, chunky, robust, and—most importantly—delicious ales.

Add to this the autumn sun gently beating down on the back of your neck, blues music serenading and titillating your other senses, great facades of rock looming down from every angle, and—did I die and go to heaven?—Joe Cocker singing his bleeding heart out in the pouring rain. Tell me how it can get better than that. Well, with experiences more pure and visceral than I doubt even heaven could offer, I hereby declare that this is the best music festival in the world, and I am chuffed to say: The 2010 Telluride Blues & Brews Festival is upon us.

This year we have the eponymous BB King headlining the festival. Past years have given us such greats as The Black Crowes, Eric Clapton, Al Green and James Brown. This is truly a grand event, year on year.

But I digress. I must go back to the delectable pints of the cold stuff that they serve up in this little box canyon in the month of September. It seems the rest of the world is finally catching on to what the soon-to-be-legendary beer blokes over here have been sneakily up to. A few months back when I was in England, there was a quaint little story on the national radio about the microbrewery revolution occurring in the U.S. I however think this is a bit of an undersell! We’re experiencing the badger’s nadgers of pint mutinies, the bee’s knees of ale rebellions, the mutt’s nuts of snifter insurgencies—a proper great beer uprising!

The very idea of what constitutes a beer is being re-written. Those who created the brilliant language of this tipple no longer wield the tools of their forefathers. Whilst Europe was sleeping, the Founding Fathers turned out to be stronger than their fathers, and although it took them some time (don’t mention Keystone, please) they’ve found their heads, won the fight, and have taken over from the greats. Holland, Germany, England: gaze on in disbelief from the floor as you lay dazed and confused (hazed and infused?) at the U.S. microbrewery revolution. There is nothing you can do! And the U.S. is no tea leaf—they have spent the past decades honing their talents, growing the choicest hops, practicing their art. Quite simply: they are now better than you at making beer. Yes, they may have foolishly laughed at the Brits’ warm beer for years, but it really was better than what was on offer to the West. Now they actually have something to back it up with. And…bollocks. They’ve got us, fair and square.

If you’re not a fan of beer though, you might consider this much hooplah about nothing. Shame on you! This is a rallying cry for the New World once again conquering the Old World. And they won’t be happy. Not at all.

Anyone fancy going down the Bath Tub for a few Britneys?