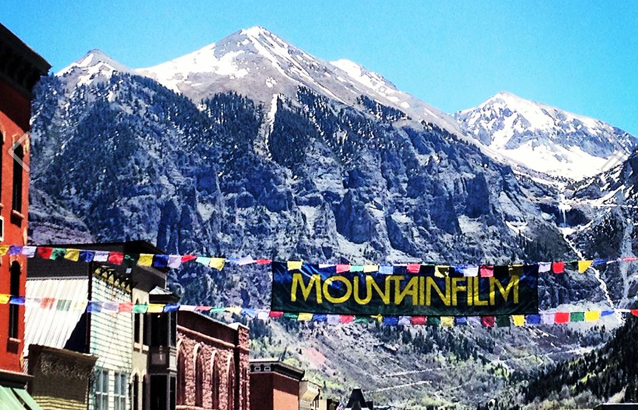 It’s not just another year that the Mountainfilm banner gets stretched across the main street in Telluride; it’s also another banner year for the festival, which has grown into one of the most beloved and well-attended of the summer events. This year another great crop of documentary films is being presented at the festival, along with the symposiums and discussions that accompany the topics brought to life by the films.
Here are just some of the highlights from this year’s lineup, with trailers to whet your appetite for the films below. For the full program or to buy passes or tickets, visit www.mountainfilm.org.

Uranium Drive-In is the story of how a proposed uranium mill in southwest Colorado divides a community of environmentalists and pro-mill advocates. The film does more than just document the nuanced complexities of the nuclear industry, it is also a beautiful portrait of the modern culture of the American West. Uranium Drive-In is the work of Suzan Beraza and REEL Thing productions, which gave us the popular film about plastic waste called Bag It.

High and Hallowed: 1963 – Official Trailer – Premiering at MountainFilm in Telluride from High & Hallowed on Vimeo.

High and Hallowed: Everest 1963 documents the story of one of the greatest Himalayan climbs in American history. The film tells the story of the first American ascent of Mt. Everest, and the pioneering ascent of the west Ridge, returning to Mt. Everest five decades later to assess whether the essence of adventure and the draw of the unknown that first lured the American explorers still exists on Mt. Everest in today’s mountaineering world.

The Crash Reel is the story of elite snowboarder Kevin Pearce and how he recovers from a traumatic brain injury, and a treatise on athletes pushing the boundaries with sports, the ever-growing risks of modern sports and a reflection on the fragility of life. The film is by two-time Academy Award nominee Lucy Walker, whose work includes Wasteland, Countdown to Zero and Devil’s Playground.


Dirty Wars follows investigative reporter and bestselling author Jeremy Scahill as he unravels the truth behind America’s covert wars in Afghanistan, Yemen, Somalia and beyond. Scahill shines a light on the secretive, powerful Joint Special Operations Command (JSOC), the CIA agents, Special Forces operators, military generals and warlords backed by the U.S. who target individuals on their “kill list” and hunt them down in secret, on night raids or with drone strikes.