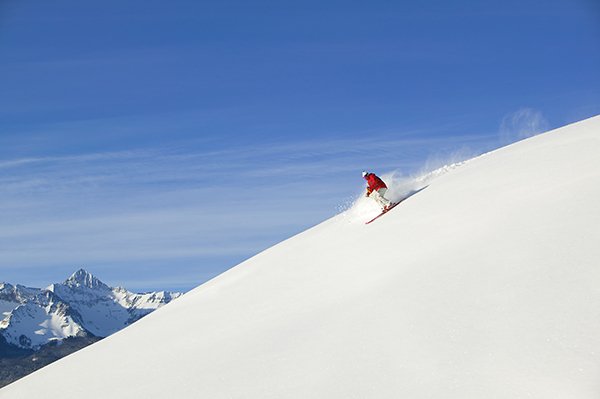 Telluride’s rumor mill spins fast and furious in this small town, but ski resort CEO Bill Jensen spoke this week to quash the speculation. No, the resort is not shutting down because of warm weather. The resort still has water to make snow, and snowmaking will continue until Feb. 23 when its 120-day contract is complete.

And no, Vail is not buying the resort.

The speculation about Vail probably arose from this week’s announcement that Telluride is joining the Epic Pass Alliance. These sort of pass alliances are transforming the ski and snowboard market in a huge way. The gist is that giving dedicated skiers and boarders (those that buy a season pass) a discount and a reason to visit another resort is good for business. People who love to hit the slopes will check out a new destination and spend money on lodging, lessons, restaurants, and retail.

Telluride was a part of the Mountain Collective alliance for the past couple of years, which grouped resorts including Alta, Jackson Hole, Mammoth, and Sun Valley. This year a new alliance was formed by Alterra (a Denver group that owns Aspen) called the Ikon Pass, which will begin next season. The Ikon exchange groups together 23 resorts including the Aspen resorts, Jackson Hole, Alta, and others.

The Ikon Pass is meant to try to snatch some of the business that the formidable Epic Pass drives with its 750,000 pass holders. Many of the top tier Epic Pass holders, says Jensen, live and ski in key destination markets that have direct flights and access to Telluride—markets like Texas, New York, Chicago, and the Southeast. For Telluride, this is a strategic alliance that will pay off in the future as these two passes will account for about a third of all North American skier visits.

What does that mean for you? If you get a season pass in Telluride next year, you’ll get 50 percent off lift tickets at the host of resorts owned by Vail. What does that mean for the town? Businesses here will continue to thrive as the resort attracts skiers and boarders from all over the country who are looking to check Telluride off their bucket list.

As far as this season, Jensen says that just like everyone else in town, he’s looking forward to skiing Milk Run. The resort has moved their snowmaking equipment to that part of the mountain and they anticipate that the run will open in mid-February. Jensen also said that despite a dry December, January snowfall was 44.5 inches, just shy of the average snowfall for the month, and that visitor numbers last month were also healthy—the third highest skier visits of any January in the resort’s history.