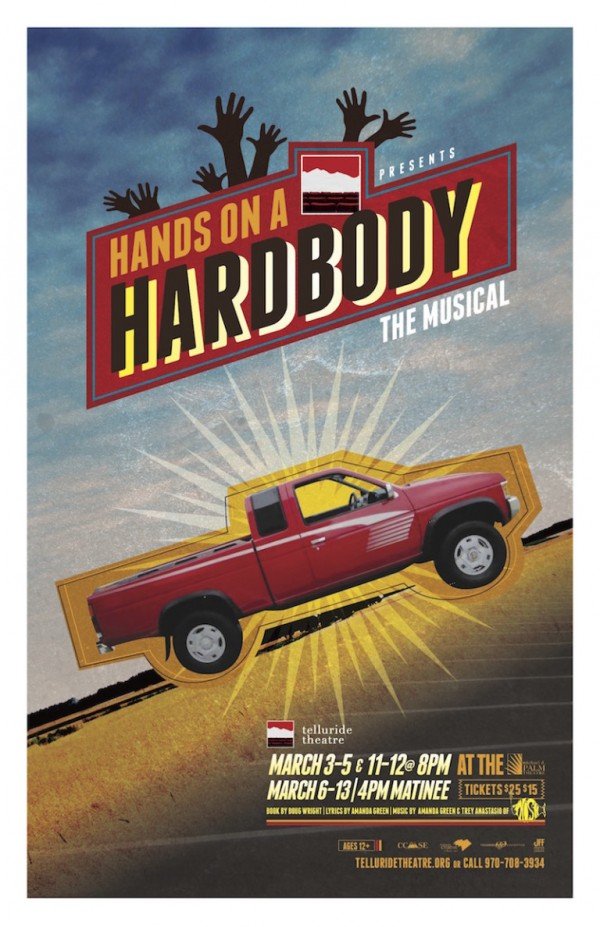 Telluride audiences will be treated this week and next to a musical co-written by Phish’s guitarist and vocalist Trey Anastasio along with renowned musical writer Amanda Green and Pulitzer Prize- winning dramatist Dough Wright. The Broadway show, “Hands on a Hardbody” is adapted from the 1997 cult documentary about real people, all desperate for a new lease on life, who compete for a new Nissan Hardbody truck at a small-town Texas car dealership. The contest is truly bizarre: each person has to stand with one hand on the prize truck at all times. Last person standing, wins!

Anastasio’s and Green’s score—which ranges through country and rock, blues and gospel and Latin sounds—won them a Tony nomination in 2014. The diverse styles of the music reflect the melting pot of characters in the show, who come from different ethnic, cultural, and socio-economic backgrounds. “The stories of all these people are infused with this incredible music,” says Sasha Sullivan of Telluride Theatre, who is directing the show. “I chose the show because it is rare to find a musical that has such amazing music start to finish. It’s a wild ride right to the end!”

Wright says his script is all about people who show “resilience in the face of economic distress… People who want in… For each of them, the Nissan Hardbody truck symbolizes a particular American dream.”

“There is so much humor, heart and humanity in this show,” said Sullivan, “and our wonderful cast and crew bring it all to life. The story is a mixture of hope and nostalgia with a side of rock-concert. Everyone in Telluride will enjoy seeing this fresh take on the American Dream on the Palm Theatre stage.”

Telluride Theatre presents “Hands on Hardbody,” with music by Trey Anastasio (of PHISH) and Amanda Green. “Hands on Hardbody” runs March 3- March 6 & March 10- March 13. Thursday through Saturdays show at 8 p.m.; Sundays are matinees at 4 p.m.  Tickets are $25 (adults) and $15 (students under 18) for all performances. Recommended for ages 12+ (some strong language is used). Tickets can be purchased at www.telluridetheatre.org or by calling 970-708-3934.

The video features one of the songs from the Broadway show:

“You can hear the sound of America singing in ‘Hands on a Hardbody’” – New York Times.

“Broadway finally got itself an all-American musical in Hands on a Hardbody!”– Variety.