More Than Just a ‘Good Dog’ 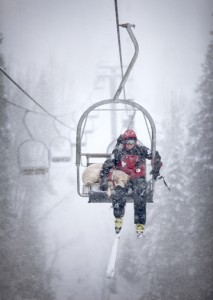 We are sad to report that Ellie, the little yellow Labrador retriever who appeared on our winter 2009-10 Telluride Magazine cover (photo by Ben Knight) riding a chairlift with handler Kim Richard, has passed on. At age 9, Ellie was at the peak of her career as an avalanche search and rescue dog for the Telluride Ski Patrol when cancer took her down. Owned and trained by Gary and Kim Richard, Ellie came from a long line of respected search dogs. Her great aunt, Jane Watenpaw (who appeared on a 1997 cover of Telluride Magazine) was the ski area’s first official avi-dog.

Ellie—named for one of Telluride’s respected octogenarians, Elvira Wunderlich—had been on the mountain since she was just a few months old. The ski patrol uses the dogs to search for avalanche victims on the occasion of a slide, but the dogs do more than just work; they are also a source of companionship and comfort. Gary and Ellie participated in several avalanche searches over the years, for the ski resort and San Miguel Search and Rescue. Ellie was a quick learner, with a solid search drive and keen nose. The job is tough on dogs, requiring them to negotiate deep snow, steep slopes, ride on snowmobiles and in helicopters, and load on moving chairlifts. Days can be extremely cold and long, often working into the dark. The physicality of the job takes its toll over the years. But the dogs seem to love it, and are often unable to contain their excitement for the day to begin, barking at their handlers and spinning in anticipation as they wait to load the chairlift in the dim light of dawn. Ellie was no exception and she touched many a patroller’s heart with her catlike display of affection by rubbing against their legs. She often participated in educational demonstrations for the ski area and at area schools, and was a big hit with the kids. At the end of the day, she went home to be a family dog, beloved by the Richard’s two children, Belle and Mattheau.