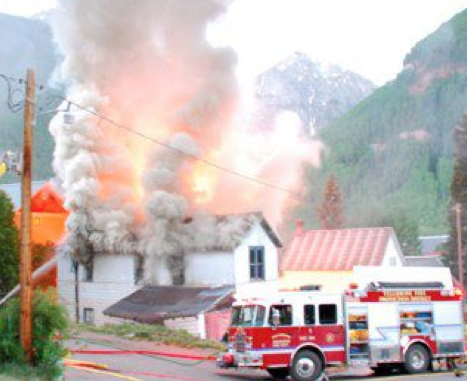 Telluride has lost nearly all of its classic, old shacks. The town used to be full of old homes, where a handful of ski bums kick in for the modest  rent and  put tapestries over the holes in the walls and jiggle the handles of toilets with ancient plumbing to make them liveable. But after the town gained sudden chic as an undiscovered resort destination, a real estate boom all but wiped out the ski bum shack, and the remaining worn-down, moldy homes badly in need of paint stand like sentries between the upscale new residences.

Scoring one of these shacks is like winning the lottery in Telluride. For a few hundred bucks a month you can walk or pedal to work or go out or hike, ski or bike. You can leave your dog in your yard or throw a big house party, something you can’t do in one of the affordable rental units in Shandoka or elsewhere. Once upon a time, all the houses in Telluride were from this era and the ski bums who came in the 70s and 80s enjoyed such privileges; now, the handful of shacks are a testament to a simpler time, and because so few remain, most of the working class young adults in town have rented or partied in all of them.

So it was no surprise when a collective cry went up on Facebook when one of the last of these shacks went up in flames last weekend. Photos were posted all over the web, and comments ran the gamut from reverie to “It was only a matter of time until someone got paid enough to light the match.” No matter what you called the house on Spruce St., the “Spruce Street Beach” for its sunny lawn or “The Hospital” for its supposed history as a medical center in town, the fire certainly ignited memories.

For me, it was not the blurry memories of artist MD’s Halloween parties that first surfaced, although those were pretty good times. My initial thought was of a long-ago barbecue, where I first met my husband, Blake. He didn’t know that my friend had invited me to The Hospital to check him out. In those days we called it “a viewing” a la the first meetings that Indian children have when their parents are arranging a marriage. Needless to say, the viewing went well—he pulled a couple of unclaimed burgers off the grill and asked me if he could give them to my dog, and I was won over enough to plan a few more “viewings,” which he would unsuspectingly believe to be chance encounters.

I am not the only one with fond memories of the old Spruce St. house, and it was a sad day for many people in Telluride when it burned down, most of all its current residents, who no doubt lost skis, bikes, clothes and other accoutrements of their in-town lifestyle. Luckily, no one was injured in the fire, reported the local newspapers and radio. That may be true, but I still can’t help but think that some small part of the town’s history and offbeat charm was a casualty of the blaze.