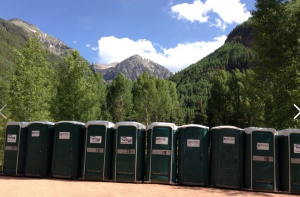 I would not want to calculate the amount of time I have spent inside a Porta-Potty during my lifetime—we have so many festivals in Telluride, with row after row of them lined up to serve the crowds—but I can tell you one thing: it is much less time than I have spent waiting to go into a Porta-Potty.
The reason, I suppose, is my general ineptitude with waiting in lines of any type. We don’t really have to wait in line much in Telluride—it’s not like an urban area where you spend half a day at the DMV, hours trying to get into a nightclub, or have to take a number waiting for someone to slice something for you in a deli. The only real lines we have are liftlines, waiting to grab the chairlift to the top of the mountain to ski, and we really only have liftlines on powder days or the holidays. And even in those lines, I’ve been know to be too deferential, to let too many people go ahead of me, until I get poked by a ski pole from someone behind me with less patience.
Waiting to go to the bathroom in a Porta-Potty, however, has its own sense of urgency. You have been listening to music and drinking beer or water for too long already, and when you have to go, you really have to go. So extremely crowded festivals like the upcoming Telluride Bluegrass Festival pose a problem for people like me, people who don’t know how to be aggressive when it comes to waiting in line. Porta-potty lines are the worst—there is no actual structure to the lines, there is not one single line per potty, but a handful of lines where the next door to pop open sometimes feels like a free-for-all, with a bunch of people rushing to occupy the same smelly spot. At times I have been in the pole position, the first person in line, and been cut off by someone jumping ahead of the whole line when the door nearest me opens up. Getting cut in a Porta-Potty line means true suffering and misery, feelings that have no place among the general euphoria of a music festival.
So I have a few rules I’d like to share with you festival-goers, a code of sorts, to help keep it a fair fight when it comes time to empty your tiny tanks.
1. MAKE EYE CONTACT. Before you go into the Porta-Potty, not after—once you’ve done your business you are free to avoid eye contact and head straight back to the main attraction, but before you go in, look around at the other lines and the people who are in the front of them. Are they standing cross-legged and looking uncomfortable? Have they been standing there for an extremely long time while your line has shrunk? Maybe it’s time to wave someone ahead of you.
2. PAY ATTENTION. When you are in the line, and one of your old friends saunters up and starts a conversation, never take your eyes off the prize. Remember, people are waiting behind you.
3. NO CUTTING. This should go without saying, and it should be a lesson you learned in kindergarten in the lunch line.
4. BE FAST! I understand that there are some things that can’t be rushed, but if you are having a long conversation with someone on your cell phone or you are trying to fix your hair or put on makeup, I can assure you there are much nicer, cleaner and more appropriate places to take care of these things.
Once you actually get into the Porta-Potties, a whole other form of etiquette takes over, the details of which I will spare you. But keep in mind that this is a shared commode, and you don’t want to be remembered as “the guy that went into the porta-potty before I did.”
Enjoy the festivals!