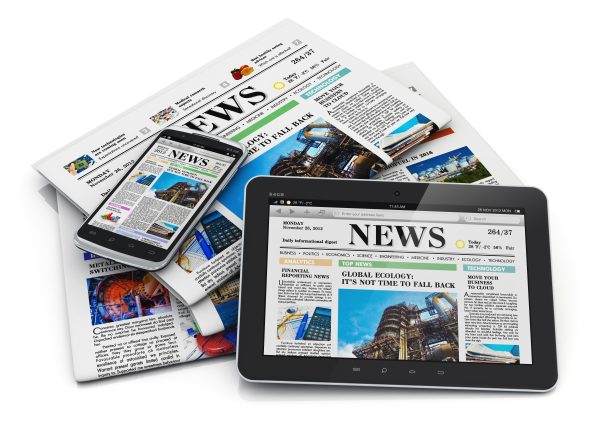 I learned that I was an “enemy of the people” around the same time that I heard about George Orwell making a posthumous comeback on Amazon with his dystopian novel 1984. Apparently there is renewed interest in the corruption and manipulation of language and critical thinking or, as Orwell wrote: “Power is in tearing human minds to pieces and putting them together again in new shapes of your own choosing.”

Even though Orwell died long before the advent of Twitter, he probably would not be surprised by a leader who uses the power of instant communication to send out disparaging messages about a free press, especially when that free press reports something the leader does not like—from pointing out there is no evidence for his charge that Obama had been tapping his phones to reporting that an armada of ships he claimed was steaming toward North Korea was, in fact, headed in the opposite direction.  Just to name a couple.

This is a man who does not like to be contradicted, who sees anyone who disagrees with him as “the enemy.”  So when he repeatedly labels the press “the enemy of the people” who promulgate “fake news,” perhaps I shouldn’t overreact. He is, after all, acting in character. But as someone who has devoted her entire adult life to the profession of journalism and, more recently, to teaching young journalists not only the skills required, but also the ethics and standards of the profession, I concede I take it a bit personally. To me, the very definition of journalism is to seek and report the truth as fully as possible, to be fair and independent, verifiable and accountable, and to speak truth to power. These tenets are embedded in the codes of ethics for any number of news organizations, and we are adding more in the digital age, including transparency (showing how the reporting was done) and community engagement (enlisting the readers and viewers in the act of gathering information and adding to it). I would suggest we add yet another feature—accompanying articles with a sidebar entitled “What we DON’T know.”  Not only is this transparent, but it might elicit some helpful information from the readers and viewers.

Those ethical standards are my traditions, and I have tried to honor them through countless reporting assignments. But the phrase “enemy of the people” also has a long tradition, dating back to Roman times, used by dictators and autocrats to delegitimize their critics. From Nero to Stalin and beyond, the phrase has been a favorite way to brand and punish those who would dare question authority.

This is not some schoolyard taunt. It comes from the President of the United States, a country where the First Amendment is deeply woven into the fabric of our freedom.  No President has ever been enamored of the press, but all of them understood that the Fourth Estate plays a critical role in keeping elected officials honest.  Thomas Jefferson—who had his quarrels with the press—once said, “Were it left to me to decide whether we should have a government without newspapers, or newspapers without a government, I should not hesitate a moment to prefer the latter.”

The embattled White House Press Secretary, Sean Spicer, has to face these enemies of the people every day, so he has become an expert in “DoubleThink”  (yes, Orwell again), the ability to hold two completely contradictory thoughts simultaneously while believing both of them to be true. After Trump repeatedly called out the press as the enemy of the people, Spicer said, “POTUS has deep respect for the first amendment and has deep respect for the press.”

But railing against the President’s denunciations of the press will do nothing to improve the situation in which we now find ourselves. A large number of Americans believe the press is lying to them, believe that traditional news media indulge in so-called “fake news.” Trump is a demagogue, an expert in fanning those flames of discontent. But he did not create the discontent. And that is where journalists need to begin. We need to rebuild the confidence of the public.

For too long now, some news outlets have tried to increase ratings and readership by providing so-called “clickbait” to keep the interest of the public and attract ad revenue.  When you shut down news bureaus around the world to save money, then fill the air with celebrity “news,”  don’t be surprised when Americans know all about the Kardashians but not Korea.  And in an age when more and more people are getting their information from Facebook and Twitter and other social media, don’t be surprised when folks retreat to their silos of bias, with “likes” and “thumbs up” sending waves of dopamine coursing through our brains, as we share and re-tweet information that could be false. And finally, we journalists have to get out of our own silos—which are primarily urban—and start listening to those parts of the country that felt ignored until Donald Trump came along and lit a fire under their smoldering resentment.

I am a big fan of News Literacy in schools, or, as I would prefer to call it, Detecting Crap and Producing Credible Content. With so much information bombarding us—from the blatantly “fake” news sites created to sow misinformation to the well-sourced and well-written investigative reports, we need to develop critical thinking skills in our young people that tell them how to judge what to trust. In our news/media literacy class at USC’s Annenberg School, one tool we provide is something called the SMELL test (courtesy of author John McManus), which teaches them to look for the Source, the source’s Motivation, the Evidence provided, the Logic of the story, and, finally, what’s Left out of the story. And we teach them how to fact-check stories before they share an item on social media, using any number of excellent fact-checking sites (Snopes.com, Politifact.com, FactCheck.org).

We also need to restore the study of civics in our classrooms. The First Amendment to the Constitution, which states, in part, “ that Congress shall make no law… abridging the freedom of speech or of a free press,” is a beautiful thing.  But it can be nibbled away, bit by bit, by an administration that is bent on cowing the press by prosecuting leakers and reporters who protect their sources. Lawyer Floyd Abrams, author of a new book, The Soul of the First Amendment, offers some hope on this score. Trump’s tweets, he argues, would be exhibit A for any First Amendment lawyer arguing that Trump’s true intent is to silence his critics. Even so, there is no guarantee that a conservative judiciary might not still find ways to dilute this powerful guarantee.

As a final antidote to the poisonous moniker of “enemy of the people,” I think we also need to tell the stories of all those journalists who have been jailed or killed for simply trying to report the truth.  We should tell students about the 115 journalists who died in 2016, from Syria to Iraq to Mexico. And if they should find themselves thinking, “Well, that’s terribly sad, but reporters aren’t killed in the U.S. for doing their jobs,” then I would refer them back to that toxic tweet from the President, labeling the press “the enemy of the people.”  Words have consequences. And no amount of doublethink from Sean Spicer or “alternative facts” from Kelly Ann Conway can change that.

Judy Muller is an Emmy-award winning reporter and former correspondent for ABC, CBS, and PBS, a commentator for NPR. She is a professor emeritus of journalism at USC’s Annenberg School.