The “Free Bear Creek” movement was born on a spring day back in 1998, after forest rangers arrested two local skiers as they exited the Bear Creek trail. The skiers, Himay Palmer and Matt Lewis, had just finished a classic backcountry tour from Ophir to Telluride; they had not, in fact, poached the closed Forest Service terrain off Telluride Ski Resort, which empties skiers and boarders onto the same trail. Palmer balked and was maced, and the two long-haired telemark skiers in handcuffs became emblematic of the struggle to keep public lands open to the public.

Telluride Mountain Club rallied around those skiers and others who sought to reopen the Bear Creek terrain off the backside of the resort. In 2000, the lobbying paid off, and an access point was opened, followed by more backcountry gates in later years.

This winter, the Bear Creek gates again slammed shut. Private landowners (including Tom Chapman, the notorious developer who buys mining claims in coveted recreation areas) threatened to sue the Forest Service and Telluride Ski Resort for allowing skiers to trespass across their private claims within the expanse of public land and the Forest Service acquiesced and closed off Bear Creek access from the ski resort. This summer, the closure could also curtail hiking the Wasatch Trail, a popular route in the high basins above Telluride. 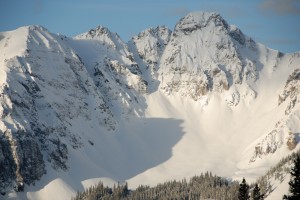 Telluride Mountain Club is once again trying to restore access to Bear Creek, a sacred spot to locals and some of the best off-piste skiing in the West. But this time, says TMC President Tor Anderson, the circumstances are different. “That time was a little easier to rally around, as it was more about helping friends who were getting prosecuted than trying to figure out an obscure access issue. This is not a rally at all. It’s just a slide show, beers and a discussion to see what people think and their ideas about the issue.”