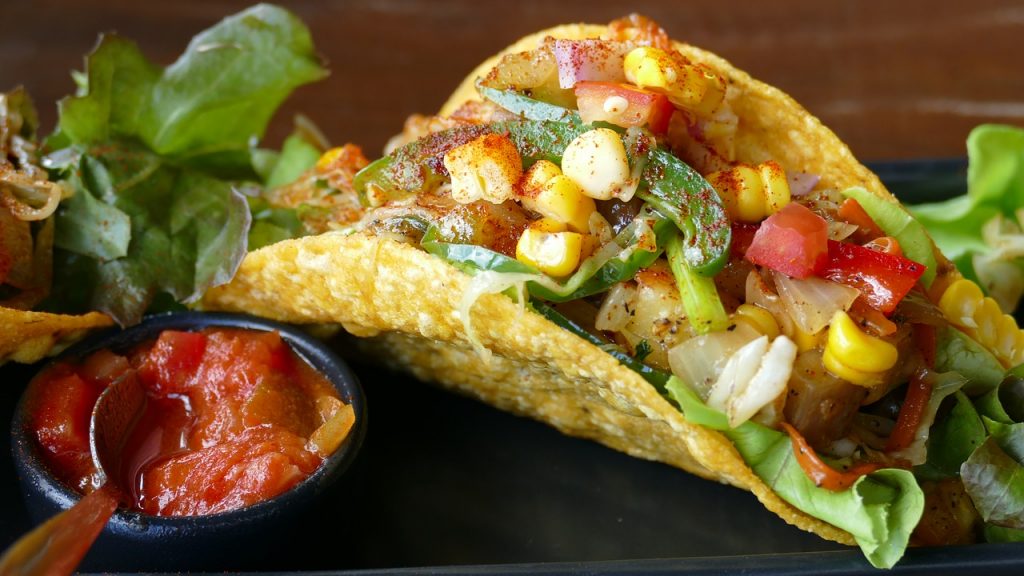 Tacos are a traditional Mexican street food, but they also translate to other culinary cultures and flavor pairings. They show up at fine dining restaurants, meticulously plated with tweezer-placed micro greens, or fresh from the griddles of food trucks on urban neighborhood corners. There are no rules when it comes to tacos. Various fillings get wrapped into savory, sometimes saucy, and often sloppy bites. Shells can range from traditional corn tortillas to thinly sliced jicama wrappers.

People in Telluride love tacos. In this town, there are three local spots that specialize in this fare. Don’t be surprised, however, if you discover some other treasures once you start trotting on the taco trail … like a Colorado Avenue restaurant with a duck/wonton version (Floradora Saloon) a barbecue joint with off-the-menu fish tacos (Oak) or a gondola ride to Mountain Village where Tacos al Pastor appear on tables amid fiery centerpieces (Black Iron Kitchen at Hotel Madeline).

If you’re looking for the whole enchilada, though, you’re in luck. La Cocina de Luz celebrates its twenty- year anniversary in Telluride this September. A longtime local favorite, La Cocina is a staple to the town’s food scene, offering breakfast, lunch, and dinner. For the tacos, first choose your protein: organic chicken, slowcooked beef with guajillo chile, grilled carne asada, deep-fried, wild-caught hake, slow-cooked achiote pork, or go vegetarian with garlic-roasted zucchini, cauliflower, and peppers. “We make a fairly traditional corn tortilla taco that is gluten-free and comes with a variety of fillings,” says owner Lucas Price. “We put guacamole on each tortilla for taste, as well as structural reasons, and finish each taco with lettuce and shredded cheese that is produced without rBGH.”

La Cocina showcases traditional and farm-to-table, health-conscious fare. The yummy, feel-good food tastes even better on the sunny patio with a margarita. Hit the complimentary chips and salsa bar to customize your tacos or just nosh on the homemade red and green salsas, pickled jalapeños, and sour cream. “We also serve tostadas that are like a crisp, flat taco, and burritos, rellenos, enchiladas, tamales, salads, and more,” says Price.

Esperanzas is not marked by a large facade, so don’t miss the stairwell to Esperanza Reyes’ downstairs den on Telluride’s main drag. Owner and chef Esperanza Reyes is a Mexican native, but has worked in restaurants in the states for 25 years. She’s held the reins to her Telluride restaurant for four years, serving authentic Mexican food and tacos of all types. “I love my Tacos Rancheros,” says Reyes, on a break from mixing up guacamole in the kitchen. “Definitely the meat is what makes them so good.”

The toppings that complete Esperanza’s tacos include spicy salsa, guacamole, and crunchy cabbage slaw. The restaurant offers a truly traditional menu of Mexican favorites from fajitas to enchiladas, as well as beans and rice and margaritas, but Reyes always recommends the tacos. “I love to eat,” she says. “I have spent most of my life in restaurants, but if there ever were another one it would just be tacos and margaritas.”

Esperanza’s basement space is surprisingly vibrant and cozy—a perfect break from summer’s oppressive sun or shelter from a sudden thunderstorm. Another cool feature of the restaurant is its partnership with the Wilkinson Public Library to put on Spanish happy hour events and promote bilingual interaction for Spanish speakers of all levels in the community.

Taco del Gnar is Telluride’s newest spot in town; the offspring of the original Ridgway restaurant opened here in September 2016. Joe Ouellette and Curtis Blanton are co-owners and chefs, and Blanton’s wife Chas is their partner and business manager. Together, they put out some of the most loved and devoured tacos in town. “Our tacos are definitely unique,” says Ouellette. “Our flavor profile is more on a global scale than traditional Mexican tacos.”

The eclectic range of tacos include a Japanese-inspired tuna taco with sushi grade ahi, umami flavor, and crunchy slaw. There is also the lambrizo taco made with lamb sausage, feta, and fresh Mediterranean tanginess. For vegetarians, try the avo or the porto —a fried avocado or a juicy portobello mushroom.

The Korean short rib and kimchi taco is full of tender, sweet-and-salty meat. It’s hands down the most popular taco according to Ouellette, but also a good partner to a lighter menu choice like the Asian flavored mahi or the classic, Baja-style shrimp taco.

Mix and match the tacos of your choice; they come out quickly and are affordable. The restaurant has a small patio for outdoor dining, but is also adjacent to Elks Park for take-out taco picnics. “Our price point and variety is really what keeps us crushing it here,” says Ouellette. “We are just super appreciative of this community.”

Decisions, decisions. The quest for the perfect taco in Telluride is a long and fruitful culinary journey, but in the end, it all comes down to tastes and preferences. If the search inspired you to create your own, you can pick up fresh, handmade tortillas at La Tortilla Ria at the base of Lift 7 at 300 S. Mahoney Drive.