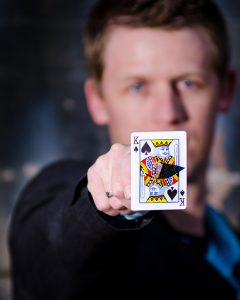 There are two different kinds of people who go to magic shows. There are the people who just want to be entertained and astounded, who are willing to suspend disbelief and simply enjoy. And there are the other kind, the people who are there to debunk, who like to turn to their friend and explain how it was done and theorize about the secrets of card tricks and sleight of hand. But both kinds of people leave Ty Gallenbeck’s “Mind Blown” magic show with the same feeling: Wow.

You might expect to see a magician of his caliber in Vegas, but Gallenbeck is a homegrown Colorado illusionist, and he loves to work the small room at the Hotel Madeline every Saturday night. He’s an incredible showman, but that’s not what makes him a great magician. It’s the magic. He doesn’t just seem to be able to read your card, he seems to be able to read minds, and every trick he performs stuns the audience. Even those people who are there to try to figure out how he does it are forced to shrug their shoulders, because everything he does, from guessing the page of a book, to making a card reappear in sealed bottle, to somehow divining a long series of numbers in the finale, seems utterly impossible. And isn’t that the point of a magic show? To experience something that we can’t explain, and to be convinced, even for just one night, that the impossible is possible, and that magic is real.

Don’t miss “Mind Blown” with Ty Gallenbeck at the Hotel Madeline. He will be performing throughout the winter season and the shows sell out quickly.