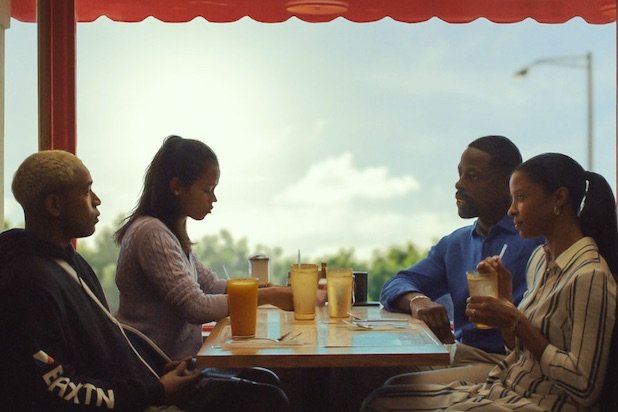 When looking at back my picks for Saturday, a family theme presented itself in three films: Waves, Marriage Story, and Pain and Glory, all excellent (to repeat: there are no unworthy films at the Telluride Film Festival).

WAVES
Waves, superbly directed by Trey Edward Shults, is a story about one family’s journey. And that family, the Williams family, in the words of its strong-willed, win-at-all-costs patriarch Ronald (Sterling K. Brown), “is not afforded the luxury of being average.”

And though this may not be exactly the director’s or the scriptwriters’ perspective, as I see it, the Williams family’s journey is carried out in “waves,” some manageable, some entirely treacherous and unforgiving. When winning or even a sense of family cohesion goes out the proverbial window, and when Tyler’s (Kelvin Harrison, Jr.) attempts to follow in his father’s rather strident footsteps go off the rails and result in a torn, heartbroken, and disillusioned family, it falls to his younger sibling, Emily, (Taylor Russell) to initiate the process of the family’s ultimate reconciliation, as she herself works to discover who she is.

Waves succeeds because the audience comes away with an understanding that redemption can occur in small steps and take us back to a reasonably familiar place where—despite the pain and loss—family is not only possible but the only way forward. Please see this film.

MARRIAGE STORY
Dramatist and Director Charlie Barber (portrayed by this year’s Silver Medallion recipient Adam Driver) and Nicole Barber, Adam’s wife and actor (Scarlett Johansson) appear, at least in the first several minutes of this film, to be the couple in a “happy” marriage story.

That notion, however, is quickly dispelled and the scenes that follow reminded me almost immediately of Kramer vs. Kramer (not a criticism but an acknowledgement that the ground covered in Marriage Story has been walked before).

The husband suddenly doesn’t “get” the wife, and the wife becomes disgusted by the same husband “who she fell in love with two minutes after she laid eyes on him.” And when the lawyers (Laura Dern, Alan Alda, and Ray Liotta) get involved the mess only gets messier.

Into this tangled and expanding web of discord the young son, Henry—much in the same way Emily does in Waves—becomes the innocent vehicle whereby a truce, if you could call it that, is brought about.

There is no victory or victor in Marriage Story on either side of the gender scorecard. The marital ceasefire is only an unspoken, extralegal resolution to be civil, once it has become painfully clear the marriage part of the story has reached its logical conclusion.

Driver and Johannson give strong performances and deserve to be seen in this film directed by Noah Baumbach.


PAIN AND GLORY
To call this Pedro Almodóvar film a family story is a bit of mischaracterization, if not a gross oversimplification. Pain and Glory is a unique—how could an Almodóvar film be anything else?—look at film director Salvador Mallo’s (Antonio Banderas) family life, such as it was. More specifically the film explores the relationship—sometimes tender and sometimes strained—between Salvador and his mother (played alternately and wonderfully by Penelope Cruz when Salvador was a young boy and Julieta Serrano in Salvador’s later years). Both female actors bring something very special to their roles, through which the audience comes to understand the rather complex life of the film’s protagonist.

What expands the story and the film’s appeal is the fact that that the Banderas character, an aging and inactive director, is actually based on the very real life of the director himself, Pedro Almodóvar. Banderas, who won Best Actor for his role in Pain and Glory at this year’s Cannes Film Festival, was faced with what had to be a daunting task of playing the man who served as his mentor and who helped him achieve his signature breakthrough in the film industry. How do you take on the character of a man you’ve known for nearly 40 years without imitating him, and at the same time convince the filmgoer about whom it is you’re portraying?

Antonio Banderas accomplishes both with remarkable skill. Salvador, as Almodóvar has, overcomes a series of physical maladies and significant pain, bit by bit, and in so doing regains his voice, his reason for living. We leave the theater with a great sense of elation that Salvador has, at long last, regained his glory. With no hesitation, I encourage everyone to see this film.