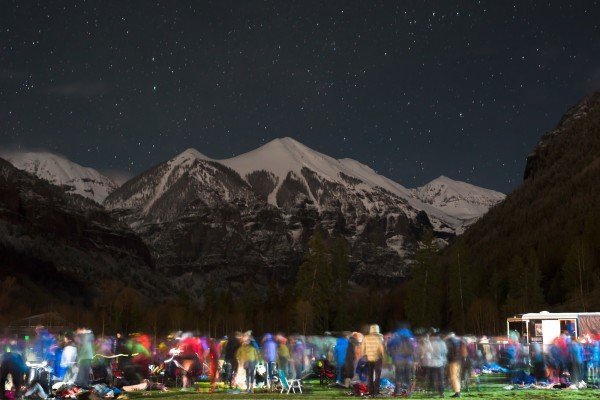 Telluride Mountainfilm kicks off this week with a tradition that embraces the core tenets of the documentary film festival: adventure and the great outdoors. Starting Wednesday night, Town Park will be transformed into an outdoor theater known as Base Camp Theatre. Movie-goers can watch films about snowboarding, skiing the steep spines of Alaska, surfing in Iceland, and mushing dogs in the Iditarod—all for free and under the stars.

The Memorial Day Weekend festival’s soft opening is on Wednesday night with the 2008 documentary That’s It, That’s All. The film features stunning footage of big mountains and stars some of the most innovative snowboarders in recent history including Travis Rice, Scotty Lago, Jeremy Jones and Danny Kass.

Thursday is another night of ski movies with the coming-of-age portrait of professional skier and model Sierra Quitiquit in How Did I Get Here. Friday’s movie features Mountainfilm Commitment grantee Sea Gypsies: The Far Side of the World. The movie chronicles a group of international vagabonds as they set sail on a ship called the Infinity from Australia to Patagonia via some of the world’s roughest waters.

Saturday night is the popular Adrenaline program, which showcases a series of some of the most heart-racing, exciting and intense short films of the action adventure world. Included are shorts about child skateboarding prodigy CJ Collins, the third installment of French skier Candide Thovex’s POV antics and walking 500 meters on a slackline suspended between the towers of Utah’s Castleton Valley, among others. The program is so popular it is playing again Sunday evening at High Camp (Telluride Conference Center). “We were overwhelmed by great shorts this year,” Klingsporn said.

Sunday’s Base Camp movie is The Great Alone, which follows dogsled racer Lance Mackey through the frigid and rugged Alaska Range as he attempts to claim the Iditarod title for the twelfth time.

Mountainfilm is the first festival to use the screen and sound system of the brand-new, just-unveiled Town Park stage. Although the festival always delivers on films about adventure, the environment and social justice at theaters around town, there is something magical about watching films under the stars in the natural and dramatic amphitheater of Telluride’s box canyon. People are encouraged to get cozy, bring low-back chairs and a picnic and claim a patch of grass in spacious Town Park.

We want people to bring warm clothes and make it an event,” Klingsporn said. “Watching a movie with a crowd is a shared experience and the natural surroundings and drinking tea under the stars — it’s usually so beautiful I think it just makes it all the more special.”

All of the Base Camp Theatre films are free, begin at 8:45 p.m. and are family friendly. Dogs, glass and shelled nuts are not allowed in Town Park.