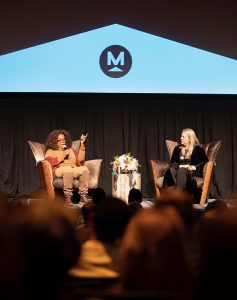 Nothing in Telluride heralds the coming of summer more than the Mountainfilm festival, held each Memorial Day weekend. This year’s event featured a special guest—Oprah Winfrey—who joined guest director Cheryl Strayed on stage at the Palm Theater for an intimate conversation about the power of storytelling.

Audiences were treated to another year of memorable, stirring movies, symposiums, and discussions. The 2019 film that swept both the Best Feature and Audience Choice Awards was 17 Blocks, a story about urban life that documents the Sanford-Durants family who live just seventeen blocks away from the nation’s capitol in Washington, DC, but in an entirely different world of gang violence, addiction, and tragedy. “To know that audiences are connecting so deeply with the Sanford family’s story is enormously meaningful,” said 17 Blocks director Davy Rothbart. “We love Mountainfilm and we’re incredibly grateful for the chance to share our film, for the awards, and for the embrace of the Mountainfilm community. We look forward to continuing to share this story and working together to create meaningful change.”

The Moving Mountains Award—which is given to a nonprofit featured in a film—was awarded to the Ol Pejeta Conservancy. The wildlife refuge in Kenya is featured in Kifaru, which tells the story of rangers caring for the last northern white rhinos in the world. The Student Award went to Youth Unstoppable, a film that tells the story of the youth climate movement through the eyes of a young filmmaker. And the festival’s new Vimeo Staff Pick Award for Best Short Film went to former Telluride residents Ben Knight and Travis Rummel for A Thousand Casts, which chronicles the incredible life of fisherman and philosopher Oliver White.

To see the full list of award winners, visit www.mountainfilm.org.