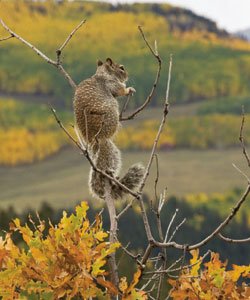 The original prospectors in the San Juans lived off the land, and respectably so: Their survival depended upon the region’s vast forests that provided fuel, construction materials and habitat for game. As mining boomed, more trees were harvested for mill buildings, railroad ties and mine timbers. The tall, straight ponderosa pine and Douglas fir were favored, but other conifers were also fed to the sawmills that sprang up near every mining camp. By the late 1800s, the entire north-facing slope (the present-day ski area) above Telluride was cleared. Despite the razing, the trees came back. And today their stock is dense and old, making them more susceptible to insect infestations, fungal cankers, heart rot, blowdown and fire. It’s obvious to even the casual observer that our trees are in trouble. Brown, dead and dying conifers dot the ski area and surrounding mountains. Come spring, some stands of aspen no longer leaf. Trees along roadways are gray and lifeless. The underlying problems seem to be the older age of trees, fire suppression and warmer springs and falls.

Dead and dying trees have created a substantial amount of fuel in much of the Rockies. Fire—which was historically a cleanser of the forest—is now heavily suppressed. The region’s dominant spruce-fir forests need infrequent—every 200 to 400 years—but intense fire to function naturally. If the effects of climate change continue to develop according to prevailing predictions, more frequent and longer-burning fires can be expected.

In northern Colorado, aging Lodgepole forests are under siege by mountain pine beetles that have decimated thousands of acres. As a result of warm and dry conditions, Subalpine fir is succumbing to the balsam bark beetle and root fungi, and spruce beetle infestations continue to wreak havoc in Engelmann spruce stands statewide. Locally, we have recently seen the western spruce budworm attack the new needles of spruce and Douglas fir; spruce beetles kill conifers on the ski area; and western tent caterpillars denude large stands of aspen in Mountain Village. Even the porcupine— whose girdling seldom kills trees in the wild—is on the rampage in Mountain village, chewing hundred of evergreens planted by landscapers.

According to the Forest Service, there are approximately 3.6 million acres of aspen in Colorado, comprising roughly 17 percent of the state’s forested lands. Numerous areas in southwest Colorado are experiencing major die-offs of Aspen groves because of Sudden Aspen Decline (SAD).

Aspen is a “pioneer” tree that colonizes areas where the conifers have been removed by fire, logging or other disturbances. The coniferous forests near historic mining towns such as Telluride, Durango and Crested Butte were clearcut over a century ago. The aspen that colonized those areas are over 100 years old now, which is the natural life span of these poplars. One contributor to SAD may be relatively even-aged stands of aspen that are actually dying of old age. Yet in many areas, even the root systems are dying. Because aspen reproduce by cloning (with sucker shoots), the death of a root system—which can normally live over 1,000 years—may leave entire stands dead. Centuries of fire exclusion, heavy livestock grazing and extensive elk browsing have left trees vulnerable to insects and diseases. Researchers have found that prolonged drought, bark beetles, wood-boring beetles and a canker fungus can all contribute to SAD.

Forests are considered saviors of climate change: They sequester carbon if healthy, but when mass die-offs occur, that same carbon is released back into the air and can actually exacerbate the planet’s warming. Our forests are struggling, and the scope of the problem may be bigger than can be managed. But Phil Kemp, retired forester for the U.S. Forest service, is hopeful. He feels that “…protecting forests means hands-on management. We can help reduce the impacts of these large-scale mortality events by using timber harvests and prescribed fire to break up mature forest stands that favor certain tree species over others, lower wildfire hazard and limit the spread of insect outbreaks. Finally, we can aggressively reforest burned, cutover or otherwise cleared forest habitat.”

While the current citizens of Telluride are not taking to the hills with axes, we still make a daily impact on our surrounding woodlands. Protecting our forests means reducing our carbon footprint and, in some respects, accepting nature’s course. By recognizing our native trees, perhaps we can be better caretakers of these forests that are crucial to wildlife habitat, watershed health, scenic beauty, recreational opportunities, and clean air and water.

This conifer is the most common evergreen in our high-country forests and, with Subalpine fir, it creates the largest undisturbed woodlands in Colorado. Engelmann grow to be tall trees with scaly bark (often reddish brown) and produce cones that propagate downward in heavy clusters at the crown of the tree. The foursided needles grow singularly from hairy twigs. a quick way to discern a spruce from a fir: If it’s got square, sticky needles, it’s a spruce; flat, flexible needles, it’s a fir.

Voted by schoolchildren on Arbor Day in 1892 to be the state tree, Colorado Blue Spruce are not always blue. In fact, they can be difficult to tell from Engelmann spruce, which may also have a blue cast to its needles. Colorado blue’s trunks are often cluttered with small, leafy twigs. Its cones are larger and needles sharper than Engelmann. Blue spruce also prefer to grow in lower and moister environments, including valleys and river corridors.

Of the three firs that grow in the region, the Subalpine is the most common, distinguished by thin, silvery-gray bark and flat, smooth needles. a longitudinal crease runs the length of its needle, and its cones project upward from the topside of its branches. Firs also have hairless (smooth) twigs. Resin from this tree produces an aroma that is noticeable when walking past downfall or broken branches.

Near timberline—where the wind is harsh, the winters long and the snow deep— stunted Engelmann spruce and Subalpine fir struggle to survive. They grow contorted and dwarfed and are referred to as Krummholz—which is German for «crooked wood.»

This deciduous, broad-leafed member of the willow family does more to affect the landscape than any other tree, creating the region’s only monoculture forest. Aspen need full sunlight to survive and are also dependent upon frequent fires, not only to limit competition from conifers, but also to stimulate root sprouts to generate a new grove. Aspen have recently been found to be one of the largest living organisms on earth: Stands that bud and change color at the same time are one giant clone—all sharing the same root system and DNA. Although it is one of the most widely distributed trees in the world, only in the Rocky Mountains do aspen take on such vibrant fall color, and the biggest aspen in the world grow in our southern reach of the range.

Another member of the willow family, the Narrowleaf Cottonwood is the purveyor of all the «cotton» (flowering catkins) that blow around town in early summer. In canyons, along river corridors and on the valley Floor, the Narrowleaf cottonwood dominates. This tree seldom gets bigger than 60 feet tall and two feet in diameter. Adding to the fall color fest, its leaves turn yellow, making the drive from Montrose or Cortez extra lovely.

The most striking pine in the area, Ponderosas grow up to 9,500 feet in elevation. These trees don’t get much taller than other conifers, but their massive trunks—often three feet in diameter—make them giants of the region. The identifying needles are up to six inches long in clusters of two to three. Ponderosa prefer dry, sunny environments and flourish in frequent fire regimes.