Women of the Telluride Ski Patrol 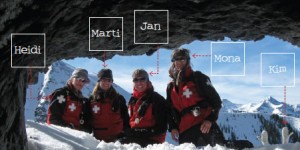 Palmyra Peak is still shrouded in the shadow of a winter morning, but already a hiker’s profile appears on the ridgeline: just a lone silhouette marching upward along the mountain’s shoulder, with skis jutting out from a backpack.

Although from this distance the early morning hiker is just a dim outline against the horizon, I know who it is. Ski patroller Jan Robberson left Prospect Bowl’s High Camp station 20 minutes before us, and now she has reached the top of the ski run, Tram Shot. The white crosses of ski patrollers Kim Richard and Heidi Attenberger are easier to distinguish, since these two women are just ahead of where I stand on the trail to the apex of 13,320-foot Palmyra Peak, the behemoth of the resort’s hike-to terrain. Behind me, the patrol’s “Auntie Mo” Wilcox is steadily making her way up the mountain. Below her, the Telluride Ski Resort is just waking up.

It’s been a while since I have been out on a mission with these ladies, who are four of the most iconic women on the Telluride Ski Patrol. Pregnancy had put me on the sidelines of my own ski patrol position for an entire winter. It’s also downright rare, in a job so dominated by men, that five women would be working together at the same station on the same day. But here I am, standing on a boot-packed trail in the early morning light en route to Palmyra Peak with Mo, Jan, Kim and Heidi. I take it all in for another moment— the view, the light, the quietude—and feel a swelling of gratitude, for this job, this place and these people. But I can’t dally for long. Kim and Heidi will be joining Jan on the summit soon, and Mona, I see, has already caught up to me.

There’s no question why Mona’s ski patrol nickname has, for decades, been “Auntie Mo.” Among this family of sundry characters, connected not just by job description but also by their allegiance to this lifestyle, Wilcox is the matriarch.

Unflappable and not prone to confrontation, she might seem an unlikely leader for this rowdy fraternity. Weighing in at no more than 100 pounds fully outfitted, she might also not appear to be one of the patrol’s hardest-working members. Yet Wilcox is both. Wilcox brings more than two decades of experience to the job, having started with the ski patrol in the winter of 1986-87. She wasn’t the first woman on the Telluride Ski Patrol (Jane Watenpaugh had that honor, hired in 1976), but Wilcox does hold another ski patrol “first” title: She was the first wife, joining the crew after marrying longtime ski patroller Gerry Wilcox in 1979. “Jane broke the macho barrier; I broke the marriage barrier,” says Wilcox, alluding to the next generation of married ski patrol couples—Kim and Gary Richard, and me and my husband, Craig Prohaska.

Aside from proving that married couples could happily coexist on the job, Wilcox paved other roads for future patrollers, both female and male. “In the early days, there was no formal training program—you basically had to train yourself,” she recalls. There is much to learn: how to provide first aid and transport to the injured, rescue the stranded, control avalanches with explosives, drive snowmobiles, handle avi-dogs and getting to know every inch of the ski area. Wilcox is now considered a reliable, approachable instructor because of her experience and non-judgmental attitude. She is also known for her willingness to do any task, from the major (such as safely maneuvering a rescue sled containing a person twice her size off the mountain) to the mundane (making sure every patrol station has coffee). “We women, we work twice as hard—but we don’t act like it,” she says.

Wilcox has an ever-upbeat attitude. What has helped her make it through more than 20 seasons as one of the few women on the team, she says, is her sense of humor. Her male coworkers, like a band of brothers, tend to make a job out of teasing each other. “You’ve got to learn how to shrug things off, but you also don’t want to let your guard down—you can’t let ’em crawl into that little weak spot, because they’re constantly trying.”

She says that it’s getting a little easier to be a woman on the ski patrol these days, thanks to the ever-growing percentage of women joining the once all-male group. Today, Telluride boasts 17 women ski patrollers out of nearly 70 total. “It’s nice to go to work and know you’ll probably have another woman at your station that day. Whether you get to ski or just work together, it’s nice to have another sister.”

Two years after Wilcox started patrolling, Jan Robberson was attracted to the Telluride Ski Patrol and enlisted in 1988. For 10 years prior to that, she had worked as a foreman and then as assistant supervisor for the resort’s Lift Department, during which time she got to know the ski patrol and what they did. “I learned it was really the best job on the mountain,” she says of her pre-patrol days, during which she was frequently a tag-along on missions. “The allure of ski patrol was all it took. I loved being on the mountain [working with the Lift Department], but I really loved to ski. Working on the lifts, you didn’t get to ski as much,” she says.

Robberson learned to ski in her home state of Michigan, but her love of the sport blossomed after taking a few ski trips to Colorado in her teens. “Skiing in the sunshine—are you kidding? I was so impressed,” she says. “I knew from then on that Colorado was where I wanted to be.”

She moved to Telluride in 1976-77, one of the worst drought seasons in the ski area’s history. But something intrigued her even during a sunny, snow-free winter, compelling her to stay. (“Tan Jan” is, after all, her nickname.)

Joining patrol was like marrying into a big, occasionally dysfunctional family, she says, one that—like most families—can be both maddening and enchanting. Despite all the “testosterone flying around” most of the time, Robberson says of patrolling, “It’s still the best job out there—the best job I can think of, really. I’m always so grateful to ride the lift in the morning and see the snow sparkling in the sun. I wouldn’t want to be anywhere else.”

When Kim Richard moved to Telluride after graduating from college in 1990, she needed a job. The first one she came upon was working for the Telluride Ski Resort’s Lift Department, which not only provided her an opportunity to improve her skiing but also introduced her to the ski patrol. “As a liftie, you meet all the ski patrollers, whether you like it or not; usually, they’re yelling and screaming at you to get the lift going,” she says. Patrolling seemed like a great job to have on the mountain, she thought, so the next year she enrolled in an EMT (emergency medical technician) class and began pestering then-ski patrol director Junior Mahoney for a job. Though she had to take a pay cut to join the patrol, when a position finally did open up during the 1992 winter season, Richard was quick to take it. “It’s one of the most incredible jobs there is, because the mountains are your workplace,” she says.

Richard, who says she never thought ski patrolling would become her profession, has nonetheless remained on the roster for 17 years—during which time she married fellow ski patroller Gary Richard and became mother to Bell (10) and Mattheau (7). From being 21 years old and fresh out of college to becoming a wife and then a mother of two, ski patol has been the one constant in Richard’s adult life. “At 21 years old, you don’t really know who you are. The ski patrol became the group of people I learned from. It’s neat to be able to grow as a person while working a job that actually pays you to do what you love,” she says.

Being the only working mother on ski patrol for many years (today there are three) was not as difficult as one would think, Richard says—except, of course, for finding an on-mountain location to pump breast milk. “Going back to work was such a nice way to get back into my life,” Richard explains. “Working on the mountain, you’re the first one there in the morning and the last one down at night. In the meantime, it can be pandemonium, but I love being there to experience the solace of the mountain.”

Two years after moving to Telluride from Germany, Heidi Attenberger joined the Telluride Ski Patrol. She came to the job for the same reason her colleagues did. “I realized someone would pay you to ski,” she says.

Attenberger took her first EMT class simply as a means to get hired on to the patrol, unaware that it would ultimately lead to her future career as a full-time paramedic for the Telluride Fire Protection District. Today, she is one of two paramedics working on the Telluride Ski Patrol. She says that when it comes to treating and transporting injured people on the mountain, it doesn’t matter whether the rescuer is male or female. “They see a person in uniform who is there to help them, and for the most part, none of them care that the person might be a woman,” she says.

Aside from obvious aspects of the job that make it a spectacular career, like skiing powder and participating in rescues, Attenberger says she appreciates the camaraderie between patrol members— both male and female. “In the winter, patrol is like a big family; I spend more time with them than anyone else. And like any family, there’s drama—especially toward the end of the season,” she says. “Toward the end, it’s hard to be nice to everyone everyday, but it seems like everyone has forgiven you by the time the next season comes around.”

Back on Palmyra Peak, we reach the summit just as the sun washes it in color. We can’t help but stay a moment, soaking in both the view and our company—five women ski patrollers, all in one place at the same time.

The conversation trickles to next season, and Mona tells us she and Gerry won’t be coming back to ski patrol. With all the new, extreme terrain Telluride is opening up, it may be a good time for them to retire. “Self-preservation,” she calls their decision, and talks of their plan to spend the winter surfing in Mexico. When their cabin in Fall Creek starts to catch the rays of early spring sunshine next March, they’ll come back to ski, she says. Although she’s characteristically upbeat, we know Mona well enough to see that leaving ski patrol after more than two decades will be bittersweet. “I don’t really want to think about how I’m going to miss it all,” she admits. “It’s been a lifetime of absolutely incredible experiences and memories.”

Silence sweeps over the five of us as we watch the sun illuminate the slopes, each of us knowing that this will be one of those incredible memories Mona is talking about.