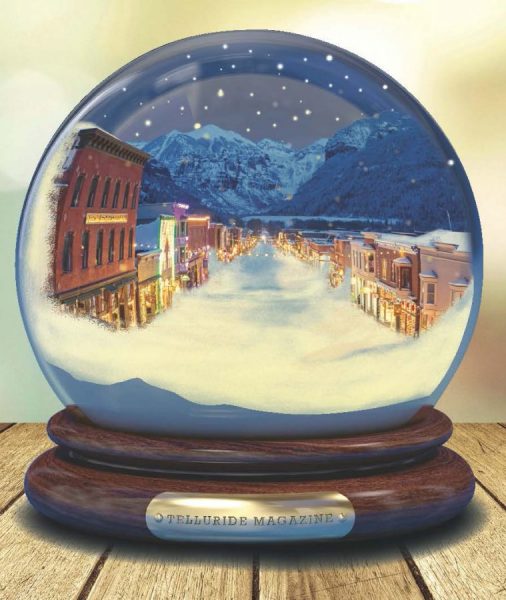 Winter flurries. They ride the wind down and into the valley and swirl, then settle, filling the air with fluff and glitter. It’s the stuff of reveries, of eyes trailing off into the dreamy distance, unfocused and soft. It is the stuff of snow globes, real and imagined. Rizzle razzle dazzle dome, as Mr. Wizard used to say. Time for this one to come home.

I am ten years old, standing in my aunt’s living room, my small hand reaching for an ordinary three-inch, half-domed, plastic snow globe. My favorite kind. Maybe a snowman. Or rosy-cheeked neighbors sledding together, or skiers on a hill, or flocked trees, or reindeer, or a house in the woods, or happy people in plaid winter coats. Or angels, or Santa, or a frozen pond. Maybe I have the skiers in my hand. I have no way of knowing that someday I will ski, let alone live in a ski resort. All I know in the moment is that this tribe looks happy, and I want a life like theirs.

This is the aunt with all the best tchotchkes in the world, right there on her oak sideboard—a charming miscellany of objects I love and love reuniting with every time we visit. The aunt whose ironed blouse is always buttoned to the top, who wears brooches and pencil skirts. Whose candy dish is never empty. Licorice toffee, saltwater taffy. And it’s always fresh.

Her tchotchkes are exotic for one reason alone: because in our family, we do not accumulate novelties like this. Not marbles or figurines, nor vacation souvenirs, or key chains, music boxes, or even travel games—let alone snow globes. Mine is a family once smitten by antique auctions in Europe where my dad is stationed in the early 60s. So our rooms aren’t like our friends’ rooms, with stuff on the walls and knickknacks on the windowsills. Our rooms are simply smaller versions of the adults’ rooms, and as such, are not sanctioned for filling up with useless junk.

Sure, I might have a doll collection. Traditional regional costumes of France on dolls of varying—but not too varying—sizes, a collection that somehow manages to pass muster. Yawn. I probably wonder what I can do to these dolls to make them come to life instead of just sitting there in that glass case I had to help refinish, because everyone had to help with those endless antiques, even me at the age of five. Eventually, sure, I probably pulled a leg or two off—just to create a little commotion and drama among the ranks. Who wouldn’t?

But it’s nothing at all like the sideboard at my aunt’s where I am now staring intently into the faces and hearts of tiny skiers, gazing so deeply, in fact, that a sigh escapes my lips. A breathy little puff of nostalgia, of increased awareness of some kind.

What a fantastic item, this world held in water and glitter. Of course, I know nothing of its history, its origins as a surgical light source, the conjuring of light through a hand-blown glass globe filled with water and particles. Or that eventually this globe will someday spawn innumerable kitschy versions of itself—White Houses, Mickey Mouses, and Mount Rushmores all memorialized in glycerin and glitter. It doesn’t really matter at all anyway when you have the real deal in hand: the classic, the traditional, the timeless winter scene.

I shake the globe hard, then hold it up even closer to my face so I can watch the white flitter (as it is called) rise and swirl. Who can say how long the skiers have been dormant, trapped in stasis. Two months? Two years? By my hand, I can set it all in motion again. Everything around me now—my two feet planted on some faded floral area rug, the distant sound of laughter (and some arguing) coming from the kitchen—everything swirls and fades into the background, as I fall under the spell of the tiny world in my hand.

These are the little people, the lucky people of the snow. They are still, yet they are not. Nothing bad ever happens here, because nothing ever happens at all except the falling and swirling of the snow, the snow, the snow. I shake it three or four more times, and watch as it eventually comes to a standstill. In my ten-year-old heart of hearts, there is rejuvenation. Hope. A mysterious feeling of magic.

Then I have a new thought, one that will generate many similar thoughts in my future life as an adult. Maybe this is all dream, all this around me; and maybe we are all really trapped inside our own tiny universes just like this one. I hear a voice calling for me to wash my hands and to help set the table, to get the good steak knife set out of the box and make sure they face inward toward the plates. My uncle is still arguing with my father.

Quickly, I sneak the snow globe behind some other taller tchotchke so that no one e lse can see it and pick it up. It’s mine, really. All through dinner I feel the presence of fallen snow.

And I feel it still, deep in my heart, high in the mountains of southwestern Colorado where I sit in a coffee shop window watching a storm come in, snow sinking down the mountain and tumbling into the box canyon, dusk laying its massive purple shadows down, as people, bundled in long coats and hats, move toward their fireplaces and cups of cocoa.

Backlit by the lamps that have just plinked on, the big, fat flakes of snow begin to fall heavily now. They fall like a colossal velvet curtain but make no noise at all. They fall into layers of peace and silence and white. Peace. Silence. And light against the darkness of night.