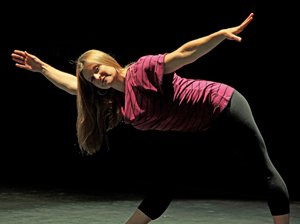 In the moments before her dance troupe took the stage at a competition, Amanda Sturdevant realized with a jolt that she’d forgotten the hair band that was a part of her costume. She sprinted upstairs to her hotel room and grabbed it, but when she returned, her group was motionless on stage, about to start. She had just a split-second to decide to sit it out or accept a point deduction for jumping in late. “I tossed off my sweater and ran out there. I just really wanted to dance.”

She was just 14 years old at the time, but ever since then, she has continued to leap in with the same enthusiasm, whether it is a dance performance, teaching a gymnastics class for children or choreographing a routine for the Telluride AIDS Benefit (TAB) Fashion Show. And she sees that same unabashed spirit in the children she teaches to dance. “Kids have a way of finding the movement on their own without being self-conscious about it. And each kid is different so it takes a lot of different techniques to teach them…I like finding what works.”

Sturdevant has a vibrant energy and the natural, ubiquitous smile that is a stage performer’s best friend. Even when she sits still, she is like a racecar idling—buzzing with the desire to move. She says she’s inspired by dancer Eugene Louis Facciuto, who became paralyzed in a vehicle accident but went on to develop a new style of jazz dance (Luigi Jazz) that accommodated his paralysis. Sturdevant has adopted the Luigi motto as her own philosophy and shares it with her students: “Never stop moving.”

Coming to Telluride was a big step for the professional dancer—would she find opportunities to perform and teach in such a small town? At first she was traveling to Denver for auditions, but eventually she fell into step with the local dance community and started teaching and performing. Alone in the dance academy studio, on the darkened stage at the Palm or at home, using a chair instead of a ballet bar, Sturdevant found her place: choreography. She came to realize that she loves the creative process of developing a routine. “With choreography, there are endless possibilities. It’s a fun space to work with, to be in a studio by yourself and let your body move to a song and figure out how to run with it. It’s peaceful and exciting at the same time.”

There’s more to it than just coming up with the steps, she says. For Sturdevant, it’s equally enjoyable to teach the routines and watch how other dancers interpret the moves. And it’s not just dancers she teaches—she is also tasked with getting models at the Green Runway and Telluride AIDS Benefit Fashion Shows to step outside of their comfort zones and dance in front of an audience. Before they rehearse, she has all the models circle up, run in place and hop to the right and left, just to loosen up. Then she has them dance to a tango piece, hoping to get their hips moving. “Overall, most people can find the beat; Telluride people move pretty well. Most are very athletic, and it’s easy to teach dance to athletic people.”

The third component, after creating the steps and teaching the dance, is the performance. Showtime is special and on-stage is where Sturdevant belongs. “Dance is a way of expressing yourself. It’s also a way of telling stories, and the connection between a performer and the audience is something really unique and exciting, especially when you’re on the stage. It’s almost like a high being up there…I have always loved performing.”