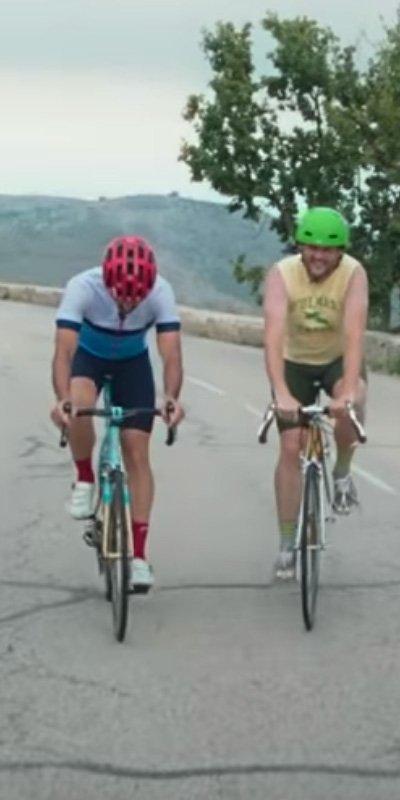 Ed. note: This is the final installment from historian and film reviewer Paul O’Rourke about the 46th annual Telluride Film Festival.

I’ve come to expect, as much as I hate to admit it, that at each Telluride Film Festival I’m not going to see all of the films I’d like to see. That there are so many good and great films, so many venues, and so little time makes it a kind of unspoken yet hard to accept truth that, in the words of one of the festival’s founders, “everyone who is here will miss seeing something great.” It’s the harsh reality of the Telluride Film Festival, but in spite of that caution, we still try to see as much as we can, even if after herculean effort we come up shy of the mark.

Of my initial list of 12 films that I wanted to see I actually saw nine. Not bad. Two of the three not on my first list (Ford v Ferrari and Waves) have been reviewed previously, the third, The Climb, was, as often happens at the TFF, was a pleasant and rewarding surprise. This film, for me and within the limited scope of what I was able to view, was the comedic hit of the 46th annual Telluride Film Festival.

In a very humorous and offbeat way, The Climb introduces us to Mike and Kyle (Mike Covino and Kyle Marvin in real life, who also directed and produced the film) as they ascend on bicycles a rather steep incline on a French back road when out of nowhere Mike informs Kyle he’s committed the most egregious act a friend can commit, especially when that friend is about to get married.

The Climb is a series of offbeat reconciliations following and subsequently followed by a series of equally unforgivable sins, always perpetrated by Mike and always forgiven by Kyle. In between the transgressions and forgiveness the two drift in and out of their lifelong and apparently unbreakable friendship.

The Climb is enjoyable and memorable entertainment. Think of it as Lost in Paris (TFF, 2016) goes ice fishing, or as Julie Huntsinger suggested, Sideways on bikes.


One of the films I had on my list prior to the festival for the simple reason it was the Palme D’Or winner at Cannes this year and that it has an intriguing trailer was Parasite.

How do you even begin to describe a film that is, at once, witty and light, and then, suddenly, goes very dramatically in the opposite direction?

Well, the answer is you don’t—at least not without giving too much away. Let’s just say this remarkable and intelligent film is about a family (a father, mother, son, and daughter) of very poor—but not unintelligent—South Koreans, who work, wheedle, and flim-flam their way into the employ, in various positions of trust, of a family (mother, father, son and daughter) of very wealthy South Koreans.

And by the looks of things the “newly arrived” family has it made, or, perhaps, thinks they have made it. But as so often happens, first appearances cannot only be deceiving but can also be short-lived, in more ways than one.

Bong Joon-ho (Memories of Murder and The Host) directs Parasite expertly, subtly, and almost fiendishly. From beginning to end, this film will have you laughing, cringing, and pondering over the consequences of class distinctions and income inequality, but more than pleased to have experienced a true gem of a movie. Parasite is sure to receive Oscar consideration, perhaps beyond the categories for “foreign” films.

As to a film that was on my list—because of its protagonist, (Adam Driver)—The Report was exactly and happily as I had anticipated. The Report is a good film, but perhaps more importantly it’s timely and speaks to (not at) us on a topic about which we need to learn more.

I suppose that if we all had been paying the kind of attention we should have been paying to the CIA’s interrogation techniques in the months and years following 9/11, the historical perspective provided by the film might have come as no surprise. The fact is, however, most of us were not giving adequate due diligence to how the Executive Branch of our government was conducting its business during the “War on Terror.” Thank goodness Daniel Jones, a Senate staffer (working for Dianne Feinstein, D-CA) was paying attention and, for over five years, getting to the bottom of the agency’s secret, ineffective, and expensive—not to mention inhumane—torture program.

In the end, the audience walks away from The Report feeling the same moral outrage and disillusionment we felt with the unfolding of events related to Watergate and the Pentagon Papers. And even though—as a consequence of Dan Jones’ investigative work—the Senate passed (78-21) the McCain-Feinstein Anti-Torture Amendment to the National Defense Authorization Act, we must now acknowledge the reality that one of the principals of the CIA torture program now heads the agency, and that 3 of the 21 no votes were cast by Lindsey Graham, Mitch McConnell, and Jeff Sessions. The more things change…

If for no reason beyond the fine direction of Scott Z. Burns in telling Jones’ story and the fine portrayals of Jones (Driver) and Feinstein (Annette Bening) go see The Report as a reminder: we need to pay attention.

The Directors of the Telluride Film Festival, Tom Luddy and Julie Huntsinger, are to be congratulated for assembling and scheduling a program that’s as strong and deep as any in recent memory. And, of course, a stellar program such as that presented during TFF #46 makes for its own unintended dilemma. As I said: you just can’t see every film you want to see. Yet those films you do catch—as we all have come to expect perhaps a little too selfishly—will be well-directed, well-acted, well-written, with superb sound, cinematography, and technical accomplishments. Not to mention the entire weekend of the SHOW is great fun greeting, meeting, reacquainting and speaking with filmmakers, film personalities, and, most of all, film lovers in line at the theaters and when strolling the streets of Telluride.

Not to gush too overly here, but it’s become my view that—rephrasing the wise words of one of the festival’s founders—“Telluride is the festival, and the Festival is Telluride.” That one cannot work well without the other may be a stretch for some, but as I see it, that simple truth has endured for 46 years now. I suspect that not much will alter this special place and its relationship with this special festival as we all move toward the Golden Anniversary in 2023.

The Assistant is a film I had on my list to see, for no other reason than I had a hunch, based on what I’d read prior to the festival, that it might be screened at TFF #46. After seeing the film, which in fact had its world premiere at TFF #46, my reasons for seeing and appreciating it expanded exponentially.

Like The Reporter, in a way, The Assistant makes us uncomfortable with what we already know and what we learn from this film about the world we live in. Julia Garner plays the title role in this Kitty Green directed film about a young woman whose new entry level job is to aid and abet (and clean up after) her boss, a powerful movie mogul. While never actually seeing this man (though we hear his voice on the other end of the phone and read his emails on her computer screen) this gripping film—seen almost exclusively through the lens of Garner’s vulnerable character—tells us all we need to presume, and ultimately know.

What makes The Assistant succeed is not the obvious; it’s not a cautionary tale about Harvey or Matt or Bill or Charlie. The film informs us that Jane (Garner)—who does speak up about what she believes is her boss’s predatory behavior—remains, sadly, muted and alone, a tree-falling-in-the-forest kind of silence. The Assistant is “Me Too” without the “too” and needs to be seen for a host of good reasons.

Director Celine Sciamma’s Portrait of a Lady on Fire is exquisite and intelligent, both from a literary (the film won best screenplay at Cannes) and a sensual perspective. Portrait is the story of Marianne (Noemie Merlant), an artist, who has been commissioned to secretly paint the stubborn and elusive Heloise (Adele Haenel). Heloise’s mother, you see, needs a portrait of her daughter in order to inform her prospective husband in Milan of what, figuratively speaking, he’s getting into.

Set along the rugged French coastline during the late 1700s the wind-swept beach scenes serve as backdrop for the visual repartee between Marianne and Heloise as the two feel each other out. Especially expert are the close-ups of Heloise’s face, almost as though the camera becomes Marianne’s eyes as she closely studies her subject so that from memory she can begin the work at hand.

In the mother’s five-day absence from the family estate on a trip to Milan to make preparations for the wedding, Marianne and Heloise are left to themselves, for Marianne to finish her portrait and for Heloise to gradually and inevitably, it seems, overcome her melancholic reserve.

Portrait of a Lady on Fire is a love story, made even more tender and meaningful because of the lifelong—though in the end long distant—friendship that grew in equal proportions and at the same time as the couple’s love for each other. This film will be on any number of lists when the Academy convenes its voters.

I had the good fortune to meet Jonathan Lethem at last year’s Telluride Film Festival. He was kind enough to grant me a few minutes of his busy schedule to chat about Motherless Brooklyn, the novel. Curious about this wonderful work of fiction’s adaptation to the silver screen, I asked him, “Will Motherless Brooklyn be in the lineup for next year’s festival?” Jonathan smiled,  “I don’t know. It’s out of my hands, really. Of course, if I did know, I couldn’t tell you.”

Well, here we are. Motherless Brooklyn, the film, was in Telluride for #46. I saved it for my last film of the weekend. I couldn’t have been more rewarded. Though the film disengages from the novel in several ways, it stays true to its voice: Lionel Essrog (Ed Norton), the clear-thinking yet Tourette’s-afflicted leading man, the novel’s and film’s protagonist and moral compass. Norton also directs this wonderful excursion into New York City’s jazz nightlife, its corrupt political machinery as personified in Moses Randolph (Alec Baldwin) and the countervailing resistance to power in Laura Rose (Gugu Mbatha-Raw). It’s a tangled yet somehow navigable web of bad actors versus good folks, the resolution of which is a satisfying completion to a wonderful story. Go see this film. Norton is sure to find his way to the podium come Oscar time.

The one film I regret not seeing at the TFF #46 that I will soon see: The Two Popes.

Here’s a summary of my picks from this year’s festival:

In the Best Picture category from TFF #46

In the Best Actor categories: