Going With the Flow 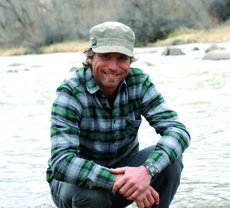 Matt Wilson has run all sorts of big rivers: the gnashing Stikine, the tight and technical Animas, the roaring gorge of the Uncompahgre and the gorgeous Huallaga, where waterfalls tumble from high above the canyon walls. But, he says, he’s just as content floating down a lazy section of the San Juan, the San Miguel or, well, pretty much anywhere water flows. “I just enjoy being on the water. That’s what I want to do forever,” says Wilson.

Wilson is a quiet guy, one of those people who don’t tend to dominate conversation in a crowded room. If he were one of those people, he might go around trumpeting his accomplishments: first descents, explorations of rivers in Russia and Madagascar, owning a kayaking school in a legendary mountain town. Instead, you have to crack him open to find that beyond the calm demeanor and humbleness is a driven athlete, dedicated guide and world-class kayaker who, as cliché as it sounds, is living his dream.

Wilson is an adventurer and athlete, a former professional kayaker who has run the kind of churning, rock-strewn water that horrifies most mortals. He is an expedition boater who loves to be the first one to nose his kayak down uncharted sections of water. He’s also a mountain biker, skier, climber and a coffee-addict who loves Latin America and is fluent in Spanish. Wilson is the kind of outdoorsman who is most alive when he’s surrounded by sky and water and the elements. And at 33, he’s been able to do what many only dream about: parlay what he loves—rivers and mountains and teaching—into a career. He owns Telluride Kayak School and spends the summer months running programs that teach the finer points of boating. When the winter arrives and the rivers are clenched in ice, he works as a ski patroller on the mountain. “I think I always just wanted to work in the mountains and on the rivers,” says Wilson. “I knew that’s where I would be the happiest.”

Wilson grew up surrounded by both in Park City, Utah. His parents put him on a pair of skis when he was a toddler and his father first took him kayaking when he was 14 on the splashy, mellow Weber River. He was swept away by the sport immediately. The challenge of navigating rapids and the prospect of adventure and exploration had a strong allure. “I got right into it pretty seriously,” he says. “It really takes hold. You get kind of obsessed with it.”

Wilson got his first gig as a river guide at 17, when he was hired for the coveted position of leading raft trips down Idaho’s Salmon River. It was a bit of luck that landed him the job—a family friend owned the company—but it set him on a permanent career path. After high school, Wilson moved to Bozeman to study Spanish at Montana State University but took time off to pursue a professional kayaking career: He was a sponsored athlete, traveling to competitions, getting camera time as he navigated massive whitewater in Teton Gravity Research films and trekking to South America to guide. It was during the trips to South America, particularly with Telluride boating legend Russell Kelly before Kelly’s death in 2004, where Wilson learned about kayaking expeditions. “That really opened my eyes to what a great tool the kayak is for exploration, rather than just running big drops and filming them,” he says.

After a few seasons, he moved back to Bozeman to finish college. There, he met a girl named Erin Raley and they fell in love. She was from a beautiful mountain town in Colorado named Telluride, and in 2006 they moved here. It was serendipity: shortly after arriving, Wilson, who was working construction, noticed a newspaper ad offering the local kayak school for sale. He seized the opportunity. The school offers youth programs, kayak and rafting trips, clinics and lessons, lake tours and stand-up paddling. It’s challenging, satisfying work, and running a business keeps him on his toes, he says. Plus, he gets to share his passion with others. “I think we all want to do what we’re good at and be able to contribute in our own small way to the greater good,” he says. “That’s why I do it.”

Despite settling here, he was still compelled to explore and paddle new routes. In September 2009, he assembled a team of kayakers, dubbed “Team Beer,” and they set off to attempt a first descent of the Huallaga River in Peru. The river, which carves a deep canyon through the Andes, had rebuffed two other expeditions with its gorge sections, unknown stretches and Class V whitewater. Team Beer waited until low flow and set off with climbing rope and 12 days’ worth of food. Three days and 52 miles later, they emerged with a first descent through a dazzling canyon where cascades tumble from above and whitewater rumbles below. “We found just incredible runnable whitewater,” he said. The move got Wilson recognized by Outside magazine as a “New King of Adventure.” Friends describe him as more than that: a compassionate guide, competent partner and incredibly humble person. He’s one of those people you want on a river trip—not only because he’s a good guy, but also because of his swift-water rescue expertise. “When you’re on the river with him, you always feel really safe,” says Raley.