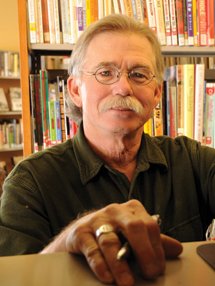 When Smith accepted a part-time job with the Wilkinson Public Library in 1995, he imagined his tenure there to last no more than a year. Yet sixteen years later, this self-described “born-again librarian” is one of the institution’s most familiar faces. With a storyteller’s resonant voice and expressive features to match, Smith is an ebullient ambassador to Telluride’s civic heart. As head of Materials Management, Smith is the man standing at the forefront of the library’s perpetual information interchange.

But it would be remiss to pigeonhole Smith strictly as a librarian. Chat with him for spell (in hushed voice, of course, if at his place of work) and meet a man whose interests are as varied as the titles that cross his desk each day. If he were to select a book about each of his fortes, he’d end up with a stack a few feet high. Among the specialties represented would be volumes about city planning, small-town politics, dog breeding, ironworking, home building and custom knife craftsmanship.

Smith and his wife, Carrie, discovered San Miguel County in the early 1980s when Carrie was working as a government teacher on the Navajo Indian Reservation in Kayenta, Arizona. On the reservation, Smith had built a successful ironworking business, specializing in custom knives. In 1982, they purchased property outside of Norwood on Wright’s Mesa, and in 1985 began construction on what Smith calls his “payday house.” As he describes, “Every payday, I’d buy more lumber, tow it out there and build a little bit more.” All told, it took Smith a full decade to complete the house, enlisting very little outside help. By 1995, after nearly 20 years living on the Navajo Reservation, the Smiths moved full-time to their just-completed house in Norwood and entered into the next chapter of their lives.

Smith admits he took the job at the library strictly because, immediately following the move here, he needed part-time work while he changed the focus of his knife business to architectural ironworking. “I never came out of college thinking I was going to become a librarian,” says Smith, who graduated from the University of Illinois with a degree in animal science; but he found he enjoyed it. The aspect of the job that resonates with him most, in his words, is “working alongside incredible people who are doing incredible work.” During his tenure, Smith has seen the library transform from a small, highly efficient town library to an innovative, five-star-rated institution that has become one of the community’s most treasured assets.

Moving off the reservation also enabled Smith to explore another avenue: public service. “I’ve always had this philosophy that one should participate in their government—and I couldn’t do that on the reservation,” he says. [Since he was not a member of the tribe, he couldn’t hold public office, nor could he vote in local elections.] “Now that I was back living somewhere that I could be involved, I wanted to be involved,” he says of his decision in 1995 to apply for a seat on the San Miguel County Planning Commission. Smith was appointed to the position, which he held for a total of 11 years. He served as chair for five of those years.

“I believe in planning,” Smith says of his long tenure on the local commission, during which time he helped the county create a highly regarded set of standards for golf course construction, oversaw deliberations with Tri-State power company that resulted in the association agreeing to underground part of its power line, and was active in early discussions with Neal Blue and the San Miguel Development Corporation regarding the fate of the Valley Floor. “I would much rather live in a community that thinks about its future than in a community that just lets its future happen around it.”

Smith stepped down from the position in 2006, noting that while the historical perspective that comes with long tenure has value, too many years of service can lead to “taking yourself too seriously.” That was the same political philosophy that led him to run twice for public office—county clerk and county commissioner—posts with little turnover and to which he hoped to bring a fresh perspective. Smith also serves on the San Miguel County Board of Adjustments, which, to his relief, meets only once a year.

His schedule is, after all, packed with other responsibilities: Smith and his wife breed and show German shepherds through their business, Oak Ridge German Shepherds. At any given time, there are at least eight dogs living in—literally inside—the Smith household. They currently have 15 dogs at home, and living in a house where dogs outnumber humans four-to-one makes for a demanding daily to-do list. Smith is up at 4 a.m. to care for the dogs before heading to work, then spends at least three hours after work feeding, grooming and exercising the animals. Many weekends, the duo loads up their converted Penske rental truck (it fits a total of 10 dogs in crates) and drives to faraway dog shows. “It’s for love of the breed,” Smith explains of the hectic nature of life with a pack—albeit, a well-trained pack—of dogs.

In April, they took home their first-ever “Best in Show” award for five-year-old Leo, who wowed the judges at a German Shepherd Specialty show in Albuquerque. While many dog owners hire professional handlers to show their dogs, Smith handled Leo for his award-winning trips around the ring.

It was, as Carrie describes, a “big deal” that Smith handled the dog for the show. And for Smith, the win just added another title to his collection: Champion Dog Handler.