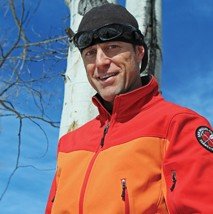 Sitting in the window of the coffee shop, Deputy Todd Rector of the San Miguel Sheriff’s Office discusses the challenges of a Search and Rescue mission along the jagged ridge between Mount Wilson and El Diente and the variables involved in getting a team of responders onto the crumbling rock, high above treeline, in the unpredictable late-afternoon weather. Calm and precise in his description of the risks, Rector leans forward and explains that the first responsibility of rescuers is their own safety, and that they are never asked to take unacceptable chances. These are not, however, your average rescuers—many of them are skilled mountaineers and outdoorsmen/women. “The neat thing about our volunteer group is these are pretty high-end folks in a number of different genres,” he says.
Rector joined Search and Rescue in the 1990s as a volunteer who wanted to get more involved in the community. Now, the rugged athlete is responsible for assembling the teams according to their skills and strengths, whether it’s rock climbing, swift-water paddling or skiing, and he often plays a key role in managing the risks involved in an operation—no easy task, given the stakes when someone is trapped in the backcountry with potentially life-threatening injuries. “That’s one of the more difficult parts of the job, to say ‘Go or no go,’” Rector says. “I’m a nose-to-the-grindstone type of person, and I like to see a job through and get it done.”
Originally from upstate New York, Rector was a member of his college ski team in New Hampshire and coached at a small ski area in the Finger Lakes region before heading to Colorado. As a rock climber and kayaker, joining Search and Rescue was a natural fit. That experience led him to train as an Emergency Medical Technician and then to join the sheriff’s office in 2000 as a full-time deputy, a transition that he says took some getting used to.
As a former volunteer, Rector says he initially felt a little guilty about thinning the ranks of unpaid emergency responders. Then there was the adjustment to a law enforcement officer’s schedule. During his first years on the job, Rector says he tried to maintain his usual routines, finishing patrol on the night shift, downing a cup of coffee and then joining friends on an early morning ski tour in Waterfall Canyon before they went off to their construction jobs. Now 42 years old, Rector is more appreciative of his down time. “I sort of feel like I’ve turned into an armchair mountaineer,” he says. “It’s fun to get up, drink a lot of coffee and hang out on the bench with your friends all morning.”
That’s more a sign of maturity than of mellowing out. After all, Rector spent his share of time slacklining in Elks Park before he ever got behind the wheel of a sheriff’s vehicle, where the rules are a little different than on Search and Rescue. Patrol officers are obligated to put themselves in harm’s way if the need arises. Rector says his training as a law enforcement officer opened his eyes to the responsibilities of the job. “It’s easy to get roped into the idea that the world is a peaceful, happy place,” says the deputy. “We’re kind of at the center of that notion here in Telluride, but there’s a lot that goes on that the public doesn’t see as much.”
Rector says the best thing about working for the sheriff’s office is the variety that comes with any given day. Whether it’s responding to a wildfire, performing court security or conducting Search and Rescue training, he says the job has broadened his experience in ways he never thought possible. “If you asked me during my upbringing if I ever thought about going into law enforcement, I’d say not a chance,” Rector says. “In hindsight, it’s a pretty good fit. If nothing else, I’m surprised how much I appreciate the public service part of the job. I enjoy being involved at the ground level.”