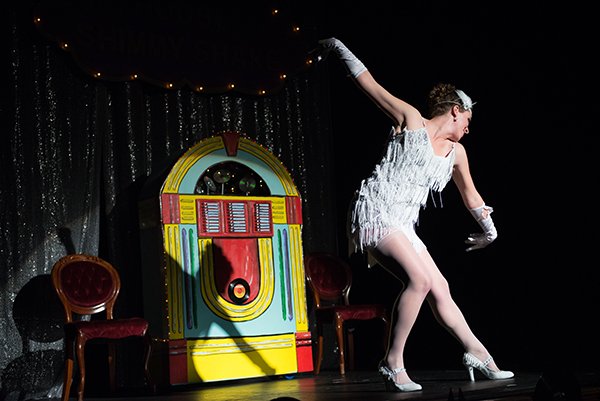 One of the signature events of the season, Telluride Theatre’s Burlesque, hits the Sheridan Opera House stage this week. The sneak peek “Cheap Thrills” performance is Wednesday, March 23, followed by two more weekend performances on Friday and Saturday, March 25–26. Read on for the history of burlesque and more information about the Telluride Theatre fundraiser, by Susan Viebrock and Telluride Inside and Out.

What’s the difference between a burlesque performer and a stripper? Burlesque shows often include striptease, but your average strip club will not include any burlesque. But my favorite answer to this question (courtesy of A. Randy Johnson) is “strippers make money; burlesque dancers make costumes.”

The word “burlesque” comes from the Spanish or Italian word “burla” which means to mock, trick, or joke. The original use of the word burlesque was seen in the 16th and 17th century to describe parodies, and grotesque or ridiculous imitations, often of authors or artists of the time.

Victorian burlesque was essentially musical theater parody of popular ballets, operas and plays. For example, Shakespeare plays were common subject for these burlesque shows. Attractive women were included, often dressed as men, but the shows were only moderately risqué in style. At this stage there was no nudity or striptease involved in burlesque. The Victorian burlesque humor was more similar to that of the English pantomime than the burlesque you see on stage today.

When did nudity first become part of burlesque?

In the late 19th century, shows featuring what we now call “striptease” started appearing simultaneously and independently in both America and Paris. In America, stripping was seen on both the vaudeville and burlesque circuits, with the trapeze artist Charmion famously performing a “disrobing” act on stage in 1896 later caught on film by Edison. In Paris theater such as the Moulin Rouge, there were acts featuring scantily clad women dancing and in tableaux vivantes (“living pictures” where performers do not move or speak). It was in this environment in the 1890s that an act was first performed during which a woman slowly removed her clothing … looking for a flea!

In the 1920s and 30s striptease became a predominant part of burlesque. In American burlesque shows, such as those put on by the Minsky brothers, high-profile “star strippers” such as Gypsy Rose Lee, Tempest Storm, and Blaze Starr were featured.  In the 1930s, in England, Laura Henderson started putting on nude shows in the Windmill Theater (although the law would not allow the performers to move) and Josephine Baker danced in a banana skirt, semi-nude, at the Folies Bergere in Paris.

Prohibition and a crack down on burlesque theaters started the decline of burlesque in America in the 1940s. In England in the 1950s there were still touring striptease shows to try to attract audiences back to the declining music halls. The 1960s, in both England and the U.S., saw the introduction of topless go-go dancers.  However, by the 1970m, burlesque had all but died out everywhere.

The 1990s saw the formation of the “Neo-burlesque” movement, which pioneered the revival and updating of the traditions of burlesque. The neo-burlesque scene now attracts performers from a range of performance backgrounds. This quote from Wikipedia sums it up nicely: “Neo-burlesque acts can be anything from classic striptease to modern dance to theatrical mini-dramas to comedic mayhem.”

Where striptease is involved, which it most often is, the emphasis is on the tease rather than the strip and most often performers only go down to G-string and pasties rather than full nudity. Although neo-burlesque performers are often inspired by a nostalgia for the glamor of the old days and enjoy honoring previous burlesque performers in their acts, neo-burlesque is taking its own evolutionary path as newcomers to the scene bring their own perspective and approach.

Today burlesque is nothing short of an art form. Enter Telluride Theatre: Their annual Burlesque shows have become one of the most popular and unique events in town. “Our annual fundraiser resurrects the raucous and raunchy variety shows of Telluride’s vaudeville era, featuring dancing, comedy, acrobatics and beautiful local women. In our sixth year, we have two very special spectacular shows planned, ‘Cheap Thrills’ & ‘Intergalactic Burlesque.’ Burlesque got its start as a class at Ah Haa in 2011, where 11 brave women signed up to learn the art of the striptease. We have grown and now 40 women participate, producing two unique shows at the Opera House and spreading the joy, freedom, and love of Burlesque in Telluride. Support year-round, live theatre. Come to the show!” says Sasha Sullivan, the artistic director for Telluride Theatre.

@ 9pm at the Sheridan Opera House

Space: the final frontier. These are the voyages of the starship Burlesque. Its mission: to explore strange new worlds, to seek out new tantalizing life and new sexy civilizations, to boldly go where no woman and her pasties have gone before.
TICKETS – $45, $35 – VIP TABLE TICKETS – $125 (each)