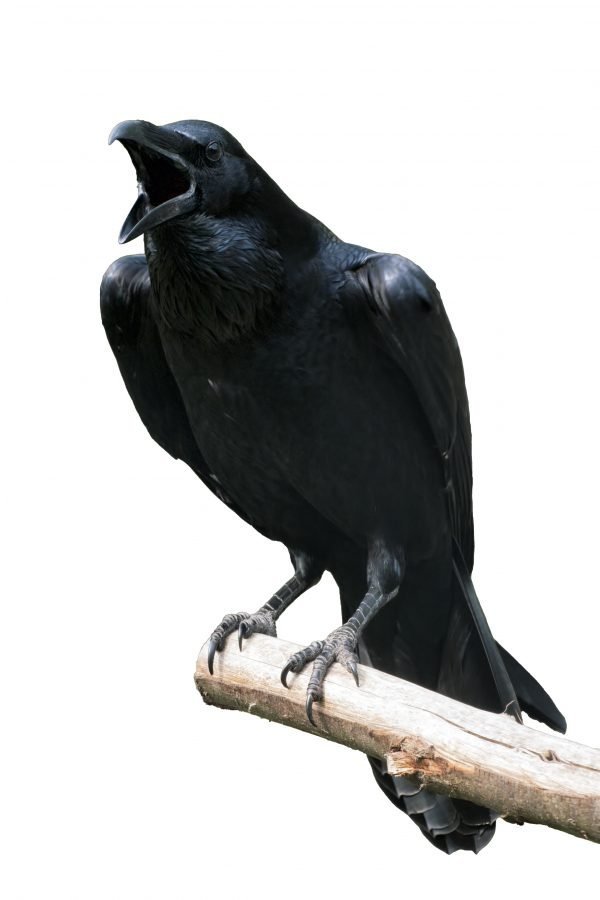 It landed in our gear on the San Juan River, a raven poking among morning dry bags and chairs left out from the night before. With a jaunty wobble, it moved from beach sand to dry box to driftwood. It’s the same raven at this camp every year, a small marking of white at the shoulder on both its wings. They live for 18 years or so. It could have been here a while.

Our canyon was still in shade. The sun had not yet cleared the cliffs when I wandered over to the bird slowly, hands in my pockets, like I was looking for something I’d lost on the ground. The raven hopped away a few feet. I stopped, half-stepped, and started again. The raven strutted to a log jam, last spring’s pileup along the shore, and I followed.

I’ve seen ravens for most of my life. We inhabit similar territories: deserts and coastal woods. There are not so many in the midland plains, the east coast, or most cities, which are prone to crows. Ravens are different animals than crows, like lions to cheetahs, or bears to raccoons. Whenever I am this close, I am struck by their size. This one was heftier than any other bird you’d see up close, and dark as coal. The largest of the songbirds, it is sometimes mistaken in flight for an eagle. This one was full grown and this beach had treated it well. It watched me with curiosity and reservation. You have something for me, it seemed to be saying.

I crouched slowly a few feet from this grifter as it hopped up to a gray Honaker boulder, bringing us to eye-level. Trickster, bead-stealer, storyteller. They are cunning creatures.

The raven on the boulder released from its beak a soft coo, like a dove, but darker. I cooed back. It clucked and flushed its neck feathers; I responded as best as I could.

I asked if it was hungry, in my own language. The raven blinked at me, its eyes like polished obsidian. It cooed. I cooed again.

Raven vocalizations have been broken down by ornithologists into regional dialects. Some call it their language, or

words. They are known to repeat human words and phrases to get a desired outcome. Among ravens there is a call for meat, one for conflict, and another to round everyone up. This coo could have been what it used when it was a chick asking for food, or a way of talking to strange ravens or people, asking who are you?

Everybody at camp loved the raven. Eating oatmeal and melon at the beach as first light sheeted down the canyon wall across from us, people called to it and followed its progress as it explored our perimeters and traipsed up around the tents behind willow and tamarisk. It viewed us warily, keeping us always twenty feet apart, save for when I came up close.

The raven and I encountered each other as we decamped. I came down to the shore with gear, and it was walking the river’s edge. We saw each other and stopped, acknowledging our previous “conversation.” We went on with our business, me loading rafts, it pacing our camp looking for a nut in the sand or a button to fly off with.

No one fed the bird. You aren’t supposed to. It makes them beggars. Ravens don’t care. They’ll beg as easily as they’ll eat the ass out of a dead cow. They are also known to be occasionally predacious, hunting lizards, frogs, mice, and songbirds.

While most birds have mating rituals, ravens have rituals all day long: wing-tuck games and preening sessions, beaks touching lightly, heads leaning together. They mob owls and hawks, and have reportedly killed their own kind, having been documented in a flock, called an unkindness, tormenting one raven who stole from another, which one researcher called a form of punishment, a moral case, a murder.

These birds are notoriously intelligent, known for bending wire to make hooks. They follow a person’s gaze to see what is being looked at, something known only in a small circle of animals, higher primates and sometimes dogs.

I saw a pair of ravens years ago as they spiraled up a thermal tossing a twig between each other. I stood on a cliff edge in the Utah desert, for a moment eye to eye with both ravens. In a few seconds, they rose a hundred feet above me. The twig went back and forth. One snatched it in its talons and caught an updraft where it let the stick sail. The stick twisted as it fell, and the second raven dove to catch it. Up and down they flew like an amusement park ride. They grabbed the twig in their beaks, and clutched it in their dark, armored toes, sending it into the air where it spun like a bit of confetti that they let fall, daring each other before they both shot after it like sharks.

The raven with the twig flew over the ground where I stood. When it let go, the second raven did not intercept. They both let it fall as they veered away. It landed not far from me. I walked over and picked it up. Had this been intentional? I’ve come to believe that everything ravens do is intentional. I once was shat on by ravens, two of them, one after the next.

These two could have let the twig tumble anywhere and I’d never have seen it land. It was a twisted bit of root, and the kinks allowed it to spin like an ornament as it fell, chosen for its aerodynamic qualities. Ritual, game, invitation, trick, I never know what to make of their actions.

The raven at the beach wasn’t playing. This was office work, daily routine. As each tent came down, new ground was exposed, another chance for a chocolate drop, a rubber band, a peanut.

I placed half of my bagel on my gear away from the rest of the river runners, lest anyone catch me in the dubious act of feeding wildlife. It’s not a good thing to do, but I felt I owed the raven something. We’d cooed to each other. The bird didn’t get it right away. It pranced through a few minutes of nonchalance.

While I wasn’t looking, the raven took my half of a bagel. I turned around to see it cruising across the water with a hunk of food in its beak. This won’t win me any favors with wildlife biologists or river runner guides. It’s something you shouldn’t do. I don’t feed squirrels or pee on mountain goat tundra, where they like to lick up the salt. You go to a place like Telluride and start feeding the animals, it’s going to become a mangy zoo. Every once in a while, though, I’ll leave something for the ravens, an offering in the deeper canyons they inhabit. Maybe they’ll pass on a good word, that I might be worth talking to.