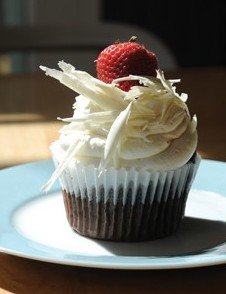 From Cinda Simons
The Butcher and the Baker

Chef Cinda Simons—co-owner of The Butcher and the Baker in Telluride, Colorado—says the cake is more important than the icing and that every ingredient counts. She always uses butter, never shortening or margarine. She also insists on using farm-fresh eggs and organic flour. The trick to baking at altitude, she says, is to understand its effect on leavening. Cupcakes rely on baking powder and baking soda to create the bubbles that make the batter rise. But Simons says the thinner air at altitude allows cupcakes to rise too quickly, setting them up for a messy collapse. She was taught to add a handful of extra flour into the mix, no more than a quarter-cup or so, to slow the process down. That trick might be a little more art than science, but the proof is in the cupcakes, and Simons stands by them. “That’s the great part about having your own business,” she says. “You make what you like, experiment and have your own beliefs.”

Preheat the oven to 350 degrees. Mix flour and coconut in a bowl; whisk buttermilk and baking soda together in another bowl. In a separate mixing bowl, beat sugar and butter for about two minutes. Add egg yolks and beat until blended. Add flour mixture and buttermilk mixture. In another bowl, beat egg whites and salt until peaks form. Fold whites into batter. Divide batter into baking cups and bake approximately 35 minutes. Let cool for 10 minutes, remove from pans and let cool completely.

Beat sugar, cream cheese, butter and vanilla until blended and smooth. Place in piping bag and squeeze onto cupcakes. Sprinkle coconut on top.