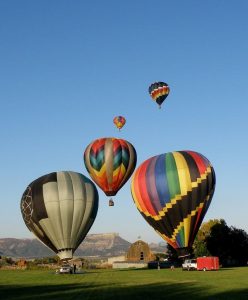 This weekend is the Telluride Balloon Festival, June 1–3. There are a lot of great hot air balloon events in this corner of Southwestern Colorado, even though we’re surrounded by the San Juan Mountains. Flying in the mountains is different than hot air ballooning across flat land. Even though the air is invisible, if you could see it, it would look a lot like water. And similarly to the way water interacts with varying terrain, swirling or “eddying,” currents rising and falling, so too does the wind when it travels across the rugged mountain landscape. So experienced pilots fly only in the very early hours after dawn, when the winds are still light and the passengers in the basket below the hot air balloon can enjoy a safe voyage. “Early in the morning, the winds are gentle and predictable,” says Gary Woods, the owner of San Juan Balloon Adventures and a longtime balloon pilot. “It’s a gentle adventure. We’re not riding the rapids.”

For most passengers, it’s an experience of a lifetime. It is sort of the opposite of the adrenaline rush of skydiving or bungee jumping—instead of falling out of the sky, you are floating aloft. There’s no steering wheel, so the only controls the pilot has is a valve and hot air to let the balloon go up or down, and the wind carries the balloon in whatever direction it’s going. Skilled pilots can read the winds and make small adjustments to the altitude to shift direction, but basically, the balloon is beholden to the sky.

A few passengers have a different kind of experience. Decades ago, Gary Woods was the sponsor of a balloon at a rally, and he was invited to take a flight with the pilot. He says it took about 30 seconds of that inaugural 10-minute flight for it to kick in, that obsession with the sport that inhabits certain people. “I was so captivated, I bought a balloon and started taking lessons immediately.”

Woods was indoctrinated into a tribe of enthusiasts, people who travel all across the country to balloon rallies, with crews of people to help them with the task of setting up and inflating the balloon and deflating and de-rigging it after the flights. They haul the baskets and the balloons, which can made up of 3,000 yards of fabric and weigh close to 1,000 pounds. But for the intrepid people who are fascinated by the sport of ballooning, the wanderlust comes naturally. Woods was the founder and producer of the Ridgway Balloon Festival, and was the “balloonmeister” of the Telluride Balloon Festival in 89-90, but he has participated in balloon rallies all over the San Juan Skyway and beyond: the invitation-only event in Monument Valley, Lake Powell, Phoenix, Gallup Red Rock Rally, and the world’s biggest ballooning event, the Albuquerque International Balloon Fiesta. He still travels to a lot of events in the fall and winter, but since he operates the commercial business out of Ridgway, he spends his summer sharing that special feeling he gets from flying with his passengers. “Everyone should at least see one of these festivals. They’re really special, so scenic, so photogenic. The pictures just don’t do it justice.”