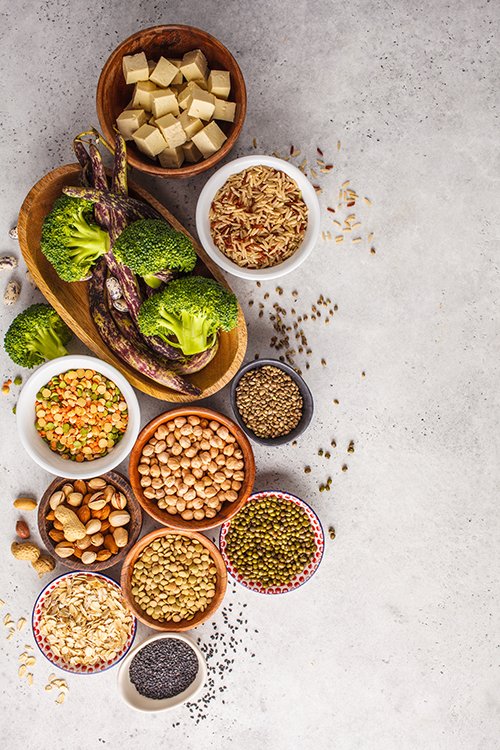 In search of plant-based food options..

Let’s go out to dinner and see a movie. Seems like a simple idea, but not for a vegan. Subsisting on plant-based food free of animal products, including dairy and eggs, vegan eaters are often on the defensive, vulnerable to underlying ingredients like fish sauce in ramen or chicken stock in risottos.

Wendy Basham, a longtime local, is vegan. She and her husband Matt cook vegan meals—including school lunches—for their children, ages 10 and 12. “When I leave my kitchen, I go into survival mode. It’s often really hard when we go out to dinner.”

Perhaps vegans should skip right to the movie. Finding a plant-based meal for a family of four is challenging, but you can’t survive on a bucket of bright yellow movie popcorn—even if it’s technically vegan.

responds to the daily demand for vegan with house-made alternatives like cashew cream cheese and almond milk. “We try to have many plant-based things, from carrot coconut milk soup to beet hummus toast, and all of our smoothies are vegan.”

From cozy cafes to high-end gastronomy, local eateries source fresh produce for modern vegan food. A far cry from the mining days of meat and potatoes, Telluride chefs are rearranging menus and plating up plant-enhanced meals.

La Cocina’s vegan tamales are also satisfying, made with masa supplemented by Earth Balance vegan butter spread and filled with zucchini, corn, and green chili. For an after-school snack, Basham often sends her hungry kiddos to High Pie for a slice of dairy-free cheese pizza or treats them to a rich, crumbly brownie at Ghost town, the source of various vegan baked goods crafted with coconut oil, banana, and avocado and solid recipes like the egg- and butter-free depression-era brownie. “I cook food that is really quite simple: stuffed peppers, veggie wraps, tofu paninis,” explains Basham, who relies on the 10-ingredient recipes from the Minimalist Baker cookbook. “Veggies, fruits, seeds, grains, and nuts are the main food groups making up our meals.”

The ingredients may be straightforward, but vegan dishes at Telluride’s finest eateries are complex, creative, and well worth the experience.  At The National, owner-chefs Erich Owen and Ross Martin enhance each category of their ever-changing 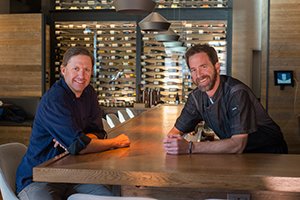 The grilled garden vegetable lasagna entrée is a favorite for both filet-fed carnivores and devout vegans. It’s a labor-intensive recipe, fine-tuned by Chef Owen. Down in The National’s tidy, new kitchen on a blustery morning, production chef Pete Goldberg explains the many layers of the dish. “It’s a 12-step process just to put together,” says Goldberg. He starts by charring zucchini, eggplant, onion, red pepper and portobello mushroom. Then, vegan ricotta is made from non-dairy yogurt, parsley, basil and fried Marcona almonds for texture. Homemade vegan pasta consists of extra firm tofu instead of eggs. Finally, a puttanesca sauce of capers, carrots, olives, tomato, basil and garlic confit deepens the flavor of the dish.

The National also has a vegan Southwest-style corn soup from Chef Ross. The soup starts with a corncob stock and incorporates raw corn, red pepper, chipotle, adobo, potato, onion, and cashew cream. Pureed with love, the soup is super creamy with a rich vermilion hue and a bright cilantro pesto garnish.

Fellow fine-dining restaurant 221 South Oak has an entire vegetarian menu with appetizers and entrees. Some dishes are vegan, other are easily transformed. Just let Chef Eliza Gavin know of dietary restrictions and she’ll eliminate the shaved Manchego cheese from the baby squash with garganelli pasta to make it vegan.

Chef Gavin gives you vegan dishes you’ll never make at home —baby squash with pepita crumble, watercress coulis, cornbread, and sweet potato. A contestant on season ten of Bravo’s Top Chef, she says her crispy tofu with chermoula—a spicy cilantro sauce—celery root slaw, cashew crema, and sweet potato is the most popular vegan dish. “It’s just as filling to do all veggies,” says Gavin, whose dedication to vegetarian cuisine is divulged in her third book, Hold the Meat, coming out this February. Look for it on the shelves at Between the Covers on Colorado Avenue.

From recipes to menus, foodies are seeking out more vegetables and whole foods. Once a week at Ghost Town, Vicki’s Fresh Food Movement hosts a pop-up market with fresh food from nearby farms, ranches, and orchards. While winter sees a stark change in vegetal availability, you can stock your pantry with seasonal specials like local quinoa, beets, squash, greens, and more.

If you’re cooking for fun, join the monthly vegan potluck organized by longtime local and retail importer Lisa Horlick. The event puts like-minded people together and introduces them to new cuisine. Horlick strives to promote plant-based whole food, passing on her most recent restaurant recommendation: Altezza at the Peaks in Mountain Village.

At Tomboy Tavern, at the base of Lift 4, a veggie burger makes a good vegan ski-day meal. Their burrito window is another vegan-friendly spot where you can customize your order with tofu, veggies, jalapenos, beans, guacamole, salsa and rice.

Now that we’ve got dinner covered, how about that movie? It turns out there are plenty of titles related to veganism and healthy eating. Available at Wilkinson Public Library, Basham recommends What the Health by part-time local Shushana Castle. Forks Over Knives is another favorite film, and The Game Changers, which screened at Mountanfilm 2018, focuses on elite athletes worldwide thriving on plant-based diets.

While the vegan movement may not move mountains, it is motivating mountain folk to explore healthier food choices and plant-based diets. And now that the movement has caught on, there are a whole lot more options available.