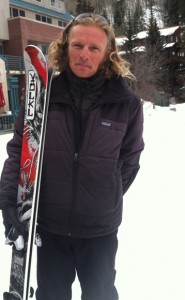 Every time I ride up Lift 9, I get the same question from other people on the chairlift: Who is that guy? They are referring to the blonde guy who is always skiing down Kant Mak’M, usually without a hat on, and often yelling out a number to people who are hooting at him or asking him “How many?”

Who is he? John Cooper, aka Coop, or 2sCoops (his DJ name at KOTO). How many what? How many runs down Kant Mak’M this season—at last check, it was 678 accumulated over 76 days on the mountain. Why? Well, why the hell not? He is shooting for 1,000 runs on Mak’M, and even though Travis Spitzer bet him $100 that he couldn’t do it, Coop says that he started his quest long before the bet and that it has nothing to do with the money. “When I set my mind on something, I’m kind of driven toward that. And this is a good goal.”

Coop is just one of the eccentric characters that make Telluride special. And this Mak’M stuff is not the first time his eccentricity has earned him some notoriety: He hiked/ran 207 Jud Wiebes last season, too. And no, he didn’t wear a hat then, either. Coop has some special form of OCD yet to be named, but when psychologists do label it, I hope they name it after him. And I hope that other people develop the same disease, because skiing and hiking are great habitual behaviors, and if you’re going to pick one ski run and one trail to do repetitively in Telluride, those are two of the classics.

When Coop first moved to Telluride from Knoxville, Tenn., he was a snowboarder and he had a Mohawk. He was younger and hung out with a party crowd in those days. But after a sabbatical in Northern Calif. from 2005-2009, he moved back and took up skiing with a vengeance. He says he figured skiing Mak’M was the way to get better at it, and he did—I actually mistook him for Pete Dahle the other day while he was ripping down Mak’M. Lanky, long blonde hair, loose shoulders, looking as casual as if he were skiing a groomer in the meadows.

I don’t think it’s just the perfect fall line and pitch of Mak’M that is transforming Coop. I think it’s more about just getting out there and skiing every day, no matter what the conditions are like or how cold his bare ears might be. “People tell me that it’s inspiring. I do it every day to get disciplined. It’s good to be focused on the good things, and it makes me appreciate things a little more, when I’m out there every day, even when the skiing’s not great. It’s just good to be connected to nature.”

2 thoughts on “Who Is That Guy Skiing Mak’M?”