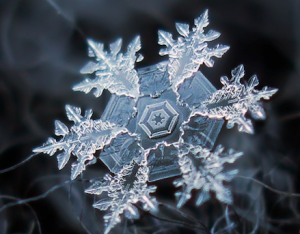 Snow is a beautiful thing, especially in Telluride. But there is maybe nothing as beautiful as an individual snowflake. Moscow photographer Alexy Kljatov takes incredible shots of snowflakes in his own backyard, on a glass surface, using natural light or an LED flashlight and using dark, woolen fabrics as a background. You can see some of his work here.

Part of the magic of snowflake crystals are that they are fractals, patterns formed from chaotic equations that contain self-similar patterns of complexity increasing with magnification. If you divide a fractal pattern into parts you get a nearly identical copy of the whole in a reduced size. Fractals occur naturally and are one of the most mysteriously beautiful things in the world.
The mathematical beauty of fractals is that their infinite complexity is formed with relatively simple equations. By iterating or repeating fractal-generating equations many times, random outputs create beautiful patterns. There is something innately pleasing to the eye, in the same way that certain melodies in music are pleasing to the ear.
Below is a short video about the Koch snowflake, one of the earliest fractal curves to be identified.